Genre: Punk;
Take a small venue like Chain Reaction. Capacity: 250, one of Orange County’s most popular concert venues. Book the Offspring, one of Orange County’s biggest musical outputs. What do you get? A hell of an awesome show that’s what! The show that occurred August 3rd, was put together by social-networking giant Myspace.com, the latest in their line of “Secret” concerts, held at small venues, with big bands. And this certainly was a big one. The Offspring have long ago ditched the club scene to play amphitheaters and arenas, so the chance to see them in close quarters was hard to pass up. I have been an Offspring fan since 1994, I was 8 years old, and hadn’t seen a proper Offspring show since HOB Anaheim, in 2002. I did not expect to be able to go see this show, because my band was playing at Hogue Barmichael’s that same night, but with a little unexpected help from a Good Samaritan (getting on what I’m going to call “the Magic List”), I managed to do both.

My band, the Black Dots, hit the Hogue Barmichaels stage at 7:35pm. In order to successfully make it to see the Offspring, the following transpired:

8:05pm: Finish Black Dots set. After the last chord sounded, and the applause died down, I literally handed off my bass to one of my guitarists, jumped off-stage, and ran to a friends car to head to Anaheim (feeling bad for making my band mates clean up, I promised them a round of tacos at our favorite taco joint).

8: 25pm: Arrive at Chain Reaction. The parking lot, of course, is full. Jumping out of the car, and instructing my friend Lauren to “Just drive and find a spot”, I sprint up to the ticket window, and flash my ID, granting me two wristbands, courtesy of “the Magic List”. Lauren catches up with me, out of breath, because she had to park down the street.

We enter the venue and are met with a capacity crowd. Doors had opened at 7:30pm, and by the time we arrived, the air was crackling of energy. People had camped out all night, and yet they still stood and waited. And waited. And waited. We managed to squeeze into the middle of the room. Wristbands for the show were given away at 9am the morning of, with kids lining up, and camping out the night before, and as I waited, I overheard people comparing the times they had arrived to get wristbands. I hear “midnight”, “4am” and “730am… we were one of the last to get wristbands”

The Offspring finally hit the stage around 8:45, and the place went off like a nuclear bomb, as the band ripped through “All I Want” at a blazing speed. The crowd’s enthusiasm showed: you could barely hear Dexter Holland’s vocals above the thunder of the crowd yelling back at them. A large moshpit started up, that didn’t seem to die down until the last chord of the closing song, “Self Esteem”, was played. People crowd surfed. People threw bottles. People got hot and sweaty (I really think Chain should invest in some sort of AC system, the resulting B.O. STICKtail left much to be desired). Being 5’2, I was tossed around like a rag doll, but it worked in my favor when I was shoved up front; standing in front of Noodles for the rest of the night. I ended up getting hit in the head, and losing an earplug , during “Hammerhead”, and the rest of the night was spent trying (and failing) to even out the night’s hearing damage by switching my lone earplug from ear to ear every couple of songs.

The band obviously fed off the energy, playing the most musically tight, and energetic set I’ve seen them play in a long time. They played a mix from almost all of their albums (minus Self-Titled, unfortunately), including surprises like “Burn it Up” and “Genocide”. At one point the crowd started chanting “Mota”, the band took a few seconds to remind them selves how to play that song, then launched into it, nailing it like it was a song they normally play at any show. “Pretty Fly (For A White Guy), still found its way on the set list, though I kind of wish they would’ve ditched it years ago. They took some time to joke around as well. Noodles took the opportunity to reveal his 3 favorite things: “[beer, masturbation, and cigarettes]”, and his popularity in the band, saying his son informed him, “you know Dad, you are the 2nd most popular guy in your band!”, before exclaiming that the most popular was newcomer drummer Pete Parada. For the most part, however, the night did belong to rocking. The band powered through 17 songs before calling it a night (an early night at that , they were done around 10pm), leaving the crowd chanting for more, even while techs began tearing down the stage.

As we were leaving, I looked up to see Dexter hanging at the back of the venue, with a circle of kids standing around him. I ended up walking up, shaking his hand, and telling him of my adventure on how I played a show before running over to catch his. He simply replied “Wow! Thank you”, seemingly surprised I had made the effort. Then, with one ear ringing, I walked down the block , clothes soaked through with sweat (most of it not mine), to my friend’s car, waving bye to other fans who shared the experience with us.

All I Want Come Out and Play Hammerhead Gone Away Burn it up Have You Ever Starin’ at the Sun Half- Truism Bad Habit Genocide Want You Bad Americana You’re Gonna Go Far, Kid Mota Can’t Get (My Head Around You) The Kids Aren’t Alright Self Esteem 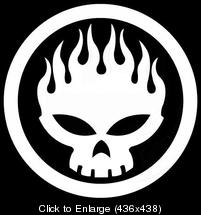