The Merciless Book of Metal Lists

THE MERCILESS BOOK OF METAL LISTS, written by NYC music scene veterans Howie Abrams and Sacha Jenkins, is set to be released on April 9, 2013. Touted as being “the most opinionated compendium ever written concerning Heavy Metal”, THE MERCILESS BOOK OF METAL LISTS is comprised of 208 jam-packed pages representing all that is glorious across the world of Heavy Metal. The book features dozens of never-before-seen photographs from iconic East Coast photographer Frank White.

The foreword for THE MERCILESS BOOK OF METAL LISTS comes from one of the most respected names in the genre, Slayer guitarist extraordinaire Kerry King, with a candid and passionate afterword from Pantera/Down frontman Philip Anselmo.

"This book will appeal to metalheads because it's what they love. They'll get to laugh at the industry and at themselves. Any information is good information, and metal kids want it." - Kerry King (Slayer)

"I am an unabashed heavy metal fan, and I know as well as anyone, that metal fans can be an extremely loyal lot. But we are a very critical lot too. With each new movement, a new, defiant, outspoken, and sovereign audience is born. Music is older than all of us, so its history is ours to writhe in and absorb." - Philip Anselmo (Pantera/Down)

There are numerous other contributions from key metal luminaries and industry personnel like:

Presented in the form of dozens of factual, random and often outrageous lists, THE MERCILESS BOOK OF METAL LISTS dares to call many out for being the worst instead of being the best. It points out the triumphs, as well as the miserable failures concerning metal, from a diehard fan's point-of-view.

TMBML leaves no stone unturned, often blurring the lines separating fact and hilarity. You want to know about album covers that feature goats on them? What Motorhead icon Lemmy's warts might tell you if they could speak? The achievements Iron Maiden would never have reached had their original vocalist Paul Dianno remained in the band? Well then, this book is for you.


You can pre-order the book on Amazon, here 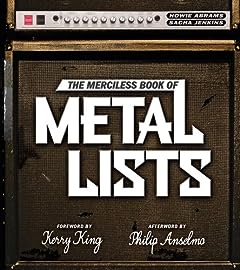