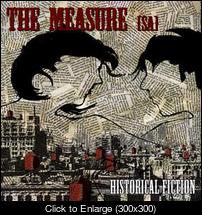 Big Smile Magazine: So please introduce yourselves and what part you take in THE MEASURE.

THE MEASURE: I'm Lauren. I play guitar and I sing. Fid plays drums and sings. Mike plays guitar and sings as well. Andrew just plays bass but we're trying to get him to sing one of these days.

Big Smile Magazine: What are some of the influences behind the type of music you guys play?

THE MEASURE: I think we're the most influenced by our friends. We have the good fortune to be in an area where there are a lot of great bands that all sound really different. So we get to play shows and be inspired by some great folks who help keep the bar set pretty high. Some of those would be The Ergs, The Roadside Graves, For Science, Hunchback, to name a few. We all listen to a lot of different types of music whether it be punk or folk or country or rock or whatever, so that all plays a part in our music as well.

Big Smile Magazine: Did you achieve the unique sound you were looking for?

THE MEASURE: I don't think we were trying to sound like anything specifically. We don't approach making music looking for the same type of sound every time. We write songs in a pretty collaborative way where we keep trying new things and just trying to sound better and better every time. I think we've been pretty successful at that and we're really happy with where we're at right now.

Big Smile Magazine: I see you're playing Carlapalooza, a yearly punk rock benefit concert for Multiple Sclerosis, can you tell us a little about how you got this privilege and what your feelings are towards this show?

THE MEASURE: I think it's great that we get to play with such great bands for a good cause. I heard about the show last year but wasn't able to attend. It's in both NJ and NYC this year so hopefully they'll be able to raise even more money this time around. We're glad to be playing!

Big Smile Magazine: This questions for Lauren. I know how hard it is for females to be in a band and even harder to be front man or in this case woman, how are you handeling the crowds who've never seen you guys and are quick to judge?

THE MEASURE: It's obviously occurred to me that some people are quick to judge bands with female singers but I've been lucky enough to never hear negative criticisms of us in that regard. I'm sure it's out there, and I know not everyone is into our sound. But whether or not that's because I'm female, I don't really know. It doesn't change how I make music or how I approach playing shows. I've gone to shows where it's mostly guys for about a decade and I'm really proud to be a girl playing and singing in a punkrock band. If someone has a problem with that then that's their issue and I try to not really think about it. If anything I've had a lot of people approach me with compliments about it, so that's always gratifying.

Big Smile Magazine: What was the inspiration behind the artwork on your four vinyls and also your LP?

THE MEASURE: Our 7"s all have cover stars, much like Smiths singles do. But all our artwork is based on a general drawing style I've been working with for a while. I do all of our artwork and layout design. The cover stars have been celebrities that we like a lot like Audrey Hepburn, Rita Hayworth, or Kurt Vonnegut. Our next single will have Rosa Parks on the cover and another split coming out is going have Roy Orbison on it. Also on our inserts we always have some reference to our animal friends, Beavie and Walter (beavers), Shitbox (a cat), or Tex (a wolf), to name a few. It's a lot to explain, but we put a lot of effort into the artwork and hope people enjoy it. That's a big part of the fun of putting out vinyl. The big artwork.

Big Smile Magazine: I see you not only perform at venue's, but you also perform at houses. Do you perform at fan's requests?

THE MEASURE: Well if you mean that we play our friends houses or at parties on tour, then yeah, absolutely. We don't opperate with a guarantee or anything like that and most of the shows we play in our area are originally set up for whatever touring band is coming through. When we're on tour we especially like playing shows that our friends set up, rather than randomly through a venue, because you know people are more likely to be into it and be having a good time.

Big Smile Magazine: Is THE MEASURE planning any big tours for the close future?

THE MEASURE: We're definitely planning on traveling a bit in 2008. We'll be announcing more as soon as we know. Our next big trip is to The Fest in Gaineville. I'm not sure which day we're playing but it's October 26-28 and well worth the trip.

Big Smile Magazine: Anything else you'd like to let fan's know that's coming up for THE MEASURE?

THE MEASURE: Well we don't plan on slowing down the releases any time soon. We have at least three more 7"s coming out in 2007 and most of the songs on our 7"s will be collected in LP and CD form sometime in 2008. We're starting to think about our next album pretty seriously, so I'm really excited to start working on that more as well. We write songs constantly, which is a wonderful thing to be able to do. So if anything just keep an eye out for new songs from us, and eventually a new album. Thanks!

Big Smile Magazine: Thanks again. And the best of luck to you