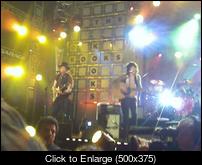 At 7:15, Victoria and I found our place in line behind an anxious group of teenagers. We were in line to see the Kooks play on the stage behind the Jimmy Kimmel show. Since the Kooks, out of the UK, were relatively new to me, I was surprised to notice the incredibly long line that formed behind us full of kids who appeared as though they were long time Kooks fans. Victoria and I peered through the cracks of the fence which the line was formed against. We watched the stage crew set up the lighting, cameras, and instruments during the half hour that we stood in line. At 7:45, the line started moving. After being searched and led through a metal detector, a group of kids sprinted towards the stage to claim a spot up front. The long line that was formed along the fence was now tightly packed around the stage. After a few more moments of watching the stage crew set up and tune the bands guitars, a large screen behind the stage turned on and began presenting to us the Jimmy Kimmel show that was being filmed inside the studio. The show started at 8:00 and at about 8:45 Terrance Howard, a guest on the night’s show, made an appearance on stage simply to say ‘What’s up’ to the crowd. A few moments later the Kooks walked out on to the stage.

The four were dressed somewhat raggedly making sure to find their most worn in, torn up clothing for their appearance. A spokesman then appeared and requested that the audience cheer for the Kooks. He then pointed out cameras swinging up in the air across the audience and told everyone to make as much noise as they possibly could. Soon, Jimmy Kimmel was spotted behind the crowd, introducing the Kooks. The cameras swung from behind the audience toward the stage and the Kooks broke out into their most recent hit song ‘Naïve’. The lead singer, Luke Pritchard, had a very unique voice offering awesome vocals as he strummed along on his guitar. Lead guitarist, Hugh Harris, handled all of the solos despite snapping his pick during the third or fourth song. Bass guitarist, Max Rafferty, got down on his bass with intense additional style: Max gazed at the crowd with a lowered head and a faced masked with his long hair, wearing a Freddy Crougar type sweater. Paul Garred tore up his drums in the background appearing to be deeply into the rhythm with his eyes apparently closed for most of their set. After about six songs, the Kooks finished up their set with a new song they claimed never to have played in front of anyone before. They also made sure to rep their new CD Inside In Inside Out. Most of their songs had an almost punk feel but included much softer vocals and rhythm than you would expect from the punk genre. After the show, I developed an appreciation for the Kooks: a band I had never really heard of before. Making our way back to my car parked across the street, Victoria and I were sure to post up some Big Smile stickers throughout Hollywood and Highlands.

Check out the Kooks at www.thekooks.co.uk/