The Finest Hour is Upon Them... (inde)

When you can say you've played shows with the likes of 'The Mystery Jets', 'The Lights' and 'Orphan Boy' then you know you're probably doing something right with your music. Grimsby (UK) based band 'The Finest Hour' are starting to make an impression across the country - something which has landed them a record deal... so things aren't looking too shabby!

After playing shows at venues like world famous 'The Cavern Club', 'Birmingham Barfly' and an appearance at 'MOHO Live' it's no surprise that Kitchen Gig Records have added them to their roster. Plans laid out will see the band join up with three other bands to release a compilation limited edition CD on the label in early 2011. The album will also be available on iTunes and to stream for free on Spotify.

Their latest sell out single, 'Move On' is still available now on iTunes and has received significant radio play on BBC radio stations, as well as throughout the UK, USA and Europe. The band have started to slow things down a little on the gig front in order to give them more time to put into writing their début album which they say "will probably contain a few songs from our live set at the moment we really want to make sure that we have plenty of fresh new material."

Having worked with Africa Studios (Hull, UK), the band is starting to develop a reputation for good quality music with "one heck of a beat".

Previously independently released single 'Battle Scars' is a wonderful example of the sheer quality musicianship which these guys hold. Beautifully bouncy guitar lines with smooth vocals all dropped in over tightly performed drumming and catchy bass - they really do have it all. Credit to the studios here too, it has all been mixed to a first class degree. The more and more you listen to their music the more and more you want to get onto the next track; addictive music is something which only the very best create.

Yet another gem among our music industry – ‘The Finest Hour’ really are a band to watch out for in 2011. I hope everything keeps building the way it has done and these guys keep making the impression they are. Ever the rarer are talented bands that are also nice people, so it’s always good to unearth one. 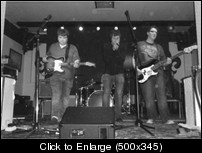