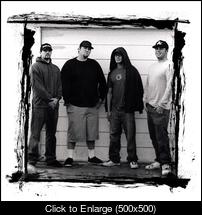 My friend Kaylee and I got a chance to sit down with all the members of The Expendables together. Here is what they had to say as a band.

Kaylee: First off we are going to start off with your names.

Adam: Hi. I’m Adam Patterson and I play the drums and sing a little bit.

Geoff: My name is Geoff Weers and I sing and play guitar.

Kaylee: What is your favorite thing about your music and what you do?

Expendables: Traveling to different cities all the time. Just getting the chance to rock out. Get to play shows all the time. Performing. The fact that this is our job. We just have a lot of fun and that’s what it’s all about.

Kaylee: How did you guys all come together?

Expendables: We were in high school and our friend's mom had a party and we were just kind of messing around. We formed a band. Just played 60s rock covers so that all the drunk people could dance and sing along to. From there we kind of evolved into what it is now.

Kaylee: Your show with 311: what were your feelings on it?

Expendables: The coolest part about it was that we got to see concert production on a whole new level. Especially at the Verizon Amphitheater.

Expendables: It is a very big place. We usually play clubs from 300 people to 1500. The food was also good. It was hot on the stage. The sun was just beating down on us.

Kaylee: How would you describe your music?

Expendables: On our myspace it says: reggae has sex with metal. Punk got in the mix and ska videotaped it all. We’ve been called "mixture rock" before. Basically anything that mixes itself with rock is called mixture rock.

Kaylee: What are your favorite bands that inspired you?

Expendables: Jimi Hendrix, Descendents, a lot of punk bands, a lot of reggae too, like Steel Pulse.

Mary Dean: I’m a big fan of theirs.

Expendables: Right on. Stuff like Stevie Ray Vaughan, and a lot of ACDC in high school.

Mary Dean: Heard you guys played with Eek-A-Mouse. What was that like?

Expendables: We actually toured with him. It was a lot of fun.

Expendables: Actually covered one of his songs. We are playing it tonight.

Mary Dean: Is it "Ganja Smuggling?" I remember you played it at the 311 show.

Mary Dean: I remember when I heard that, I freaked out. I was like NO WAY!

Expendables: Be prepared to freak out again.

Mary Dean: If you could perform with any musician(s) alive or dead, who would it be?

Expendables: The Police would be cool. Pantera would also be cool. Iron Maiden as well - that would be pretty gnarly. Stevie Ray Vaughan would be good too.

Mary Dean: Besides playing music, what do you guys like to do?

Mary Dean: How does your songwriting process go?

Expendables: Sometimes we do it together. Other times people will bring in a part of a song and we’ll work from there.

Mary Dean: You guys have been a band for a while. How has your music progressed over time?

Expendables: We’ve gotten better as musicians. When we started out we were in high school; we were still working out the kinks. It means our songs are a little more complex nowadays compared to back then. We are still, though, four guys who like to hang out and play music together and have a good time.

Mary Dean: That’s good. How important are your fans to you guys?

Expendables: Fans are great; that is what is most important. When we play a show and we see the crowd is really into it, it makes us feel so energetic. Even if it’s a small crowd or big crowd it doesn’t matter. We are just glad that people are there and enjoying it. We really feed off that. We really love it when people enjoy our music; it’s the most important thing to us. After we are done we hang out with the people who came to see us. We’ll sign whatever people want us to sign. We love to just hang out.

Mary Dean: Do you have any last words for your fans that are reading this?

Expendables: Come see us at a show. Thanks a lot. If you don’t have any of our music go ahead and download it on iTunes or steal it. We’d prefer it if you bought it. (everyone laughs) Tell a friend who tells a friend.