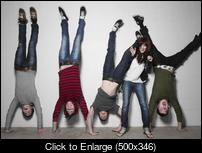 Genre: Indie;
A tour that I have been looking forward to had to be The Daily Chorus Tour across the West Coast passing through Anaheim, CA at the Chain Reaction venue. This tour feature's bands that are in the 'top 10 unsigned artists' for The Daily Chorus which includes Anarbor, Overview, and Brave Citizens who I've had the privlege to get an interview with a few months ago at The Knitting Factory, their first show as a band. Opening on this night were the men of Drive By. Sadly I wasn't aware that the show had already begun since I was dealing with some business issue's outside due to someone posing as Brave Citizens publicist. Just to let everyone know before hand, be sure you don't have someone labeling themselves to be working with you because this can cause a tie up. So sorry about that guys, I owe you one! <3 Overview. One thing I love about this band was in reality they were an 8 piece band with only 4 members. The guys in Overview not only had one instrument down but they also traded off instruments in between songs, once even during the middle of a song. Overview had a unique sound to them musically, yet you can still feel the Indie/Rock coming from their songs off their EP 'Fourty-Four Stone Tigers' which was released in 2007. Overview will continue the rest of The Daily Chorus Tour alongside the next band to perform.

Brave Citizens took the spot light as if they've been on the road for months and were ready to get the crowd moving to the beautiful work coming off their EP entitled 'Evolutions'. Lead vocals, Andrew, brought his intense emotion through not only his lyrical and vocal talents, but also you can see it through his eye's and performance over all. BC also played several new songs that were recently recorded to be on their full length which is heard to be coming out in late spring. Adam, who you would have thought to be stationary with not only playing guitar, singing back up and also handling keys, had the most energy of the group which gave the crowd more excitement. Brave Citizens is set to finish up their tour in Berkeley, CA but let's just hope they'll be on the road once again soon. Sexy rockers, Venus Infers were next to take stage being added to this Chain Reaction show not too far before the tour was set to take off. Recently releasing their video of their hit, 'London's Raining', Venus Infers seemed to have a good majority of the crowd in their favor, which I'm not surprised by. These Indie Rockers, always put their best foot forward at every show even though bassist, Richard, had been battling the flu all weekend long. One of the many reasons why I enjoy to see these hard working guys at their best is to watch drummer, Steve, work his unique styled drum set with so much enthusiasm. A band I've been reading about on The Daily Chorus and excited to see perform were the head liners of this show, Anarbor, coming from the sunny city of Phoenix, Arizona. First thing that amazed me was how young the whole band looked and how talented they were at playing their instruments. You could tell that a few of the members were still getting use to bringing out their stage presence (or they might have been super tired), yet this did not include guitarist Mike the youngest of the bunch, who was working the entire stage to get their SoCal fan's hyped. We'll be seeing this young, talented group in the near future once again performing at the local Anaheim, CA venue. Be sure to check out these video's also: Venus Infers -Brave Citizens Live - TBA