I'm not a fan of heavier music. All too often volumes go up higher than tolerable for most humans, the crowd are battered with a barrage of abuse from the drunken band members and everything just falls into chaos. I've lost count of the times I've been watching bands like that. When music is done well then it's done well, no matter what the genre. Surrender The Coast simply define good music. No hang on, that's not enough... They define what music should be.

If you hear anyone telling you that Scremo music died out a few years back then ignore them, they've not seen these guys. Clean vocals, heavy breakdowns, tuneful screaming, powerful drums and driving bass all come together to produce one hell of a sound.

If you’re into Alternative Rock, little bit of metal or to be honest, the heavier side of indie, then you have no option but to really (and I mean really) love this Leicester (Midlands, UK) based band.

Having just completed their first UK wide tour the band are out promoting their self-financed EP, 'Avert Your Eyes'. Out on tour the 6 piece band stopped off in Stourbridge (Base Studios) where I, and 200 other gig goers, caught somewhat of a mesmerizing performance. Few bands can muster up that kind of support a good many miles from home and even fewer control crowds like Surrender The Coast can. Energetic to the point of near collapse, but never compromising the quality of their sound.

It's refreshing knowing that not only are they good musicians but they're some of the very nicest people in music. It's rare to find such talented performers so firmly rooted the ground. Though the gaggle of girls surrounding their merch table was probably satisfying...

Promoters, labels and venues from around the world; take note, Surrender The Coast should be a name you need to start looking out for.

To find out more about the band then check out their Facebook page at - www.facebook.com/pages/Surrender-The-Coast/271537017860 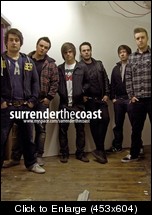