Hello J. and the gang. How is everyone doing today?


Who all is Suavity's Mouthpiece made up of?

J: Suavity's Mouthpiece exists in many formats. I, J. Trafford, write and produce all the music. Meredith Bigatel is a visual artist and bass guitarist who has been with Suavity's Mouthpiece since its inception - she performs alongside me at all of our live exhibitions. Regrettably, we have been unable to maintain a stable percussionist for live settings; our current drummer is named Ian Hatfield. He has been with us since last summer, when we realized that we could no longer rely on our previous drummer. However, this constitutes only the tip of the iceberg. We are constantly creating with a closely-knit group of musicians and artists of other media, all of whom operate in arenas of sound and sight that differ from ours. Two examples of this would be Ashley Peer - a progressive torchsinger who duets with me on a tortuous song called "Ballad" on our new album - and the Feel-Good Revolution - a relatively new acoustic duo comprised of songwriters Cody Kraski and Claire Secen from here in Pittsburgh who also sing on a track that I wrote for them, called "Fox Kraski;" I also produced their debut album, "Songs From the Sidewalk," released in 2010. We feel that working with artists outside our typical spectrum helps us more effectively innovate.


You guys are called Suavity's Mouthpiece. Interesting band name, where does it originate from?

J: The honest brutality of elegance has long lacked an accessible podium. Or something like that. In reality, the only other creative project that COULD'VE called itself "Suavity's Mouthpiece" instead called itself the Mirror Lounge. And may they someday return, so that the burden of giving suavity to the world may be shared. But don't get me wrong, I love Northern Portrait as well. Hello, Stefan.


The style of your music is running in every direction, from punk to jazz, pop to dance. If you could narrow down your band to 2 genre's of music, what would they be?

M: Probably experimental and punk. Experimental covers the basis of what we do, and of course, punk is my favorite, so I'm biased and like to think that our stuff gives off that kind of vibe.

J: Naively, we used to try and name it conclusively. I've tried to convince people in the past that I was in a punk band. Mostly, this was just for my own pleasure of watching a uniformed "punk"'s face contort when the synth flutes kicked in. Honestly, I really just think of it as sound now. It's something that makes fashionable gashes in silence, just like the late night creakings of an old iron bridge, or MGMT.


We get some interesting bands and sounds coming out of Southern California (LA) but I noticed you're from PA and didnt see a ton of variety like you guys coming from PA, who are some of your major influences and what drives you to create music?

M: I've been influenced heavily by punk, and bassists like Flea, who I greatly admire. My brother's been in punk bands throughout the years, and was my inspiration to pick up a bass in the first place. One of my main influences is Anti-Flag. They're from Pittsburgh like us, and have always been one of my favorites to see live, and I love their bass-lines

J: I'm going to instead use this opportunity to plug the Vacuum Party, Awaiting Daylight, the Feel-Good Revolution, and Champagne Riot.


You have a Cd out right now, tell us a little about it and where people can get ahold of it.

J: It's not out just yet. It is complete, and we're looking at dates in late April and early May for possible releases, just depending on when things fall. The disc is called "Suavity's Mouthpiece vs. Music," and it will be released by Subspine Records, based in Dallas, TX. One single, "I Get Abstract," was released on February 7th, 2011. I must make a point to mention that we offer all of our services as Suavity's Mouthpiece without any charge to you, the listener. This means that all studio recordings by Suavity's Mouthpiece can perpetually be obtained absolutely free of charge in compact disc and digital download formats, FREE of CHARGE; WE DO NOT ACCEPT PAYMENT, EVER. We do because innovation should have no price tag and because money should never be able to be suggested as a motive for creativity. Any money that does come our way is immediately donated to organizations we deem worthy of the assistance. This policy will never change as long as our operations function. That being said, the new album, "Suavity's Mouthpiece vs. Music" will be available in compact disc and digital download formats FREE of CHARGE on its release date at: setfireto.webs.com/catalog.htm


What venue if your favorite to perform at and why?


Do you have any crazy fan stories?

J: Those who truly enjoy the work we do are very personable. We find a mutual sense of comfort with them - they feel free to approach us and talk to us, and we feel free to not be pompous, condescending celebrities to them (no, that is something we save exclusively for magazine interviews). In a world where so many independent bands find they must force their family and friends to listen to their rotten music to gain almighty "exposure," we find that for us, it is quite the opposite - close personal friendships typically develop after someone has expressed interest in our work, and they feel comfortable enough knowing that we will not patronize them.


Thank you for the awesome interview with Big Smile Magazine. Do you have any words for your fans and new fans reading this interview?

J: If you're listening to Modest Mouse, stop and think hard about what you are doing. 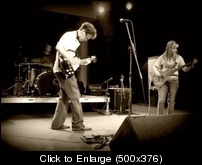