Someone Still Loves You Boris Yeltsin -Let it Sway

Someone Still Loves You Boris Yeltsin "Let it Sway"

“From my mouth, we've got the sound/ gonna give it out.” Back in the Saddle, the opening track from Someone Still Loves You Boris Yeltsin’s third full length, “Let it Sway” lives up to their claims….they have got the sound. Scheduled for release on August 17th on Polyvinyl Records and produced by Death Cab for Cutie’s Chris Walla, this album is a great soundtrack to cap off the end of summer. SSLYBY live up to the light and loveable sound found on 2008’s “Pershing.” These 12 songs are ear-pleasing, easy listening, much like the songs that veterans Jimmy Eat World have crafted. Although the music may seem very popish, SSLYBY is able to craft their sound and mold it so that it is still inventive and fresh. The handclaps and “na na na’s” found in Banned (by the man) are too good to be true. In pairs has restricted, basic, and seemingly cheesy lyrics. “Not all God’s creatures come in pairs you know.” However, the instrumentation takes over on this one and makes this a magical song. When I first read the lyrics in the CD case, I instantly discounted the song and imagined it to be a song I would skip. After listening to the pulsing percussion and the syllable breaks in the vocals I was convinced otherwise. The lyrics suddenly meshed and came together to form a beautiful and idiosyncratic song that truly stands on its own. Stuart Gets lost is a melodic, is a somber slow song that is swept up in whispering vocals, picking guitar and soft piano sounds. The songs on this record all follow the pattern of light, breezy, indie rock. The record is crafty and soothing. It is a charming record because it is easy listening and fun.

SSLYBY have produced a solid third album. It is certainly not Grammy winning music, nor is it attempting to be. The album is refreshing because it just is what it is. SSLYBY is a band that has mastered their craft of creating well-blended harmonies, relatable lyrics, and smooth indie rock. “Let it Sway” shines from beginning to end. There are a few tracks that stand out, but all twelve tracks contribute to this loveable gem. This record will provide great additions to SSLYBY’s live show on their upcoming tour. This album is just what you would expect from them…and sometimes, as this record proves, it is nice to know what to expect. 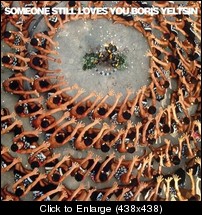