Fans who have stayed loyal to The Smashing Pumpkins this far into their evolution are pretty accepting of Billy Corgan’s eccentricities. To that end, The Pumpkins opened their show at Pittsburgh’s Stage AE by performing their latest release, Oceana, in its entirety. Despite anemic radio support for Oceana, I saw much of the crowd singing along word for word with the new offering. If Melon Collie and the Infinite Sadness was Corgan’s Tommy; Oceana is his Quadrophenia. It is lush, powerful, and beautiful, but is destined to be under appreciated when held up next to the tour de force that was Melon Collie…. or Siamese Dream.
The indoor music hall at Stage AE is a fantastic sounding room and The Pumpkins provided maximum volume without crossing the comfort barrier. The sonic details of Oceana were easily absorbed even for the uninitiated listener like me. The surreal aquatic animations projected onto the immense orb behind the band were the perfect visual accompaniment for a band that maximizes the dark/light, loud/soft aesthetic.
Corgan has a lust for the familiar. The current version of The Smashing Pumpkins is visually very similar to the original line up and they can all play their asses off. Guitarist Jeff Schroeder was up to the twin tasks of shredding and providing more subtle atmospheres with ease. Nicole Fiorentino anchored the low end solidly and possesses a beautiful voice that locked in tight with Corgan’s signature vocal approach. Drummer Mike Byrne channeled Jimmy Chamberlain as well as Jimmy Chamberlain ever did. Billy Corgan is a great guitar player! He stylistically lands somewhere between The Edge and Alex Lifeson. Not a bad place to end up. And he pulled off that skewed vocal delivery perfectly. How does he do that! Corgan was the clear leader of the band without any of the control freak sneaking in. He looked relaxed and chatted up the fans several times during the set.
Just as I was thinking, “Billy Corgan is kind of the American David Bowie”, they played ‘Space Oddity’. That song served as the transition to material that was familiar to all. The Pumpkins lit up the crowd with a string of hits from Adore, Siamese Dream, and Mellon Collie…; the high-points for me being ‘Cherub Rock’ and ‘Ava Adore’. Any apathy shown for the Oceana set, and it was minor, was erased during the thunderous whine of the “Klasssics with a ‘K’ set”. The Smashing Pumpkins acquitted themselves quite well on this night in Pittsburgh.
Dave Buzard 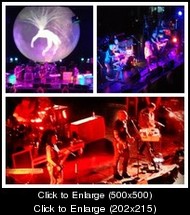