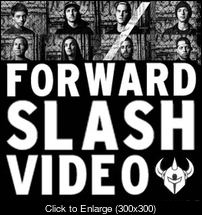 Title:Forward Slash
Run Time: 8:25
The first thing you should know is Forward Slash a no filler video by Darkstar. This is one of the few videos that I've seen in a long time that's under an hour long, but leaves you feeling like you've watched a full length skate video . You will find full parts by Ryan Decenzo and Pierre Luc Gagnon(PLG) that will blow your mind .
This video shows an immense amount of progression it starts off with a vert skating part, and ends with Ryan Decenzo redefining progression . Somewhere in the middle you'll find some greatly talented skaters including Tyson Bowerbank.. Never heard of him ? Well he just so happens to effortlessly manage to land the worlds first 540 done a nine set . To many who don't know skateboarding well that may not be a big deal, because Tony Hawk's been doing 900's for a long time now . What you have to realize is this isn't perfect surface or a ramp. This is a street spot with many variables to conquer. Attempting a 540 down almost any large stair set could send you to the hospital, and was unheard of until Tyson stepped up to the challenge . From his part in the video as whole you can expect great things from Tyson in the future.
Other great skaters grace the montage section of the video such as; Adam Dyet, Chet Thomas,
Manolo Robles,Greg Lutzka,Cameo Wilson,John Hanlon. Each of these skaters showed that Darkstar is definitely alive and well. Personally before watching this short video I had thought Darkstar had started to fall off the skate scene. Thankfully I was wrong in assuming this to be true . So if you where starting to write off Darkstar as one of your favorite skate companies give this video a watch. I guarantee you won't be disappointed.
Track list
Pierre-Luc Gagnon - Dwarves - Jonney Glue
Montage - Del The Funky #sapien & Tame One - Flashback
Ryan Decenzo - WetMetal - Dealing With Witches
www.skatevideosite.com/skatevideos/darkstar-forward-slash/soundtrack
Original image file credit given to dogwaymedia.com/wp-content/uploads/2012/07/01.jpg