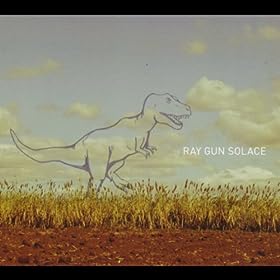 Ray Gun Solace is a solo project from an extraordinary artist, named Dan Howe. This isn't the first musical endeavor from Dan. Some other projects include Saving Gracie, and The Lyrics Game.
The Self-titled album put out by Dan was primarily recorded in his living room, to which he's joked if you listen close enough, “you can hear his pet rabbit munching in the background.” The laborious two years it took to make this album was not in vain. This seven track album within 30 minutes, it's a very good success!
The rawness of this album is exciting to me. So many artists go out of their way to eliminate that small bit of a window into their world. The openness you get from this album is like you get to see a small bit of this project, and the man behind it. It had made me think of a few artists I used to listen to when I was a bit younger, like Remember Maine and a much softer version of Jimmy Eat World. All the while, the musical stylings reminded me of Third Eye Blind and Say Anything. The picking is what really reminded me of Say Anything. The story lines Ray Gun Solace chose to back his songs is what made me think of Third Eye Blind.
You first get the idea of what the album will be like with the opener that is “Back To The Grind,” the shortest song on the album. Though I like the entirety of the song, with it's emotionally binding vocals and instrumental portions kicking in and out, I'm not entirely sure how I feel when it's just a few strums and his raspy voice.
While the tracks pick up in tempo, by the third track, I'm questioning where the album is going. It's slowly sounding more like a slightly edgier rockabilly album. Not feeling the background vocals/echos that were provided.
However, Dan pulls it back in the fourth track with, “The Guitar and His Boy.” This is the longest track on the album at a little over 6 minutes. Dans' voice is very soothing along with the gentle picking of his guitar. It has to be one of my favorite tracks. It's got an angelic feel to it, almost like this song will take you by the hand and send you off to sleep.
From their we go into “Apologist Biologist,” which I'm still not entirely sure on what to think. Though I'm pretty sure I may actually hear his pet rabbit munching on some food in the beginning. I like the storyline of the song, just not so much the music itself.
After that song is “2nd Street,” which I really loved. It starts off quite mysterious with the vocals popping in, adding just a touch more of some mystery. Off the whole album I'd have to say this song and “The Guitar and His Boy,” are probably my favorite. The song has a great build to it, and it never caused me to lose interest. I was hooked.
Overall, I enjoyed listening to this album. Though I had a few issues with a few of the songs, I really think this album a 7 ½ out of 10. It has a lot of passion sewn into its seams, and I believe that there are a lot of people out there that will find out they like Ray Gun Solace too.

His album is on most streaming sites including iTunes.
He also recently had an interview with Big Smile which you can check out too.
He is also on Facebook