Featured Artists: Screeching Weasel; Genre: Punk;
In light of Screeching Weasel’s sudden implosion two months ago at South By Southwest (SXSW) it can be a bit difficult to give their new record, First World Manifesto, their first album in over 10 years, an objective hearing. With the band breaking up just as they were starting to come back, and this being their first record in so long, the album becomes a “What if – ?” work; as in “What if Ben Weasel had kept his mouth shut during their SXSW showcase instead of ranting about how bad everything at SXSW was?” “What if he hadn’t attacked the girl who threw a piece of ice at him?” What if he hadn’t tried to fight the [female] club owner who intervened?” “What if all of the other band members hadn’t immediately quit the band as result of his behavior, leading to lots of other bands pulling out of Weasel-Fest, supposed to be happening in Chicago this month, but since canceled?” “What if Weasel-Fest had been a success instead because none of the earlier crap had gone down?” and finally “What if Screeching Weasel had then helped spark a new wave of traditionally old-school influenced pop-punk?” Unfortunately we will never know the answers to these questions and speculation is futile. What’s done, unfortunately, is done.

First World Manifesto, however, remains with us and deserves to be heard. The album is available from Fat Wreck Chords and was produced by Mike Kennerty of the All American Rejects.

Setting all of Screeching Weasel’s recent history to one side how does their first album in over 10 years stack up on its own merits? Actually, the album is pretty good. It’s definitely worth checking out for its own sake. Ben Weasel remains a pop-punk songwriter in the tradition of the Ramones just as he always has been. Regardless of what may have happened with the band itself Screeching Weasel fans should still like this record. The sound has not changed very much over the years. Still writing about Punk and / or relationships with catchy melodies that stick in the head, although sometimes one wonders how Ben Weasel manages to sing so many words in such a short time. Track 1 is particularly notorious for this. The song, “Follow Your Leaders,” contains about 5,000 words (okay that’s an exaggeration; it’s more like 4,500 words), all of which are sung in two minutes and six seconds. When you look at all the lyrics, and then at the running time of the song you think “how will Ben Weasel sing this?” The answer is “without breaking a sweat, naturally.” I’m not sure when he gets to breathe during the song; maybe he has an extra lung or something because he never struggles to get the words out.

The songs run the range of a normal Screeching Weasel record. There are a lot of songs about crappy relationships. The outstanding track of this type is track 5, “Totem Pole,” which is a winner both musically and lyrically. In “Totem Pole” the singer sings about how he never knows where he stands with his girl: is he “Number one in line or as a backup just in case?” but despite everything is going stick around, finishing up that he hates himself for it, but will do it anyway:

Musically this song is catchy as any track on the record and it will stick in your head for an extended period of time.

Other notable songs on crappy relationships include “Frankengirl” (track 2) where the singer is reciting the reasons why he has to leave his crazy “Franken[stein]” girl. Also “Creepy Crawl” (track 6), which parallels the singer’s partner with a spider spinning a web of mind games and deception with him. The song also features guest vocals from Joe King of the #s.

But not everything is about relationships – bad or otherwise. A couple of songs deal with the humdrum dreariness of daily life. Track 3, “Beginningless Vacation,” in particular, is about being tied down to a cubicle office job which you can never leave because of debts, family obligations, and basic necessities of everyday life, leaving you unable to pursue your dreams or extended time off – hence a “beginningless vacation.”

A political rant turns up in track 12, “Come See the Violence Inherent in the System,” although unlike when other bands do these sorts of songs Screeching Weasel does it well. This song also contains some very tongue twistery lyrics set to fast music, but again Ben Weasel manages to pull it off.

And off course Punk Rock itself comes under scrutiny in a few of the tracks from various angles. The opening track, “Follow Your Leaders,” (yeah the one with 4,500 words mentioned above), is both parody of Punk stereotypes, attacks on such stereotypes, and even a little nostalgia for when punk used to be considered dangerous. There’s too many angles to describe in this song – go read the lyrics, or, better yet, go listen to the song itself.

Other songs taking on the scene include track 8, “Friday Night Nation,” which is about trying to fit in for the wrong reasons, and the last track, “Little Big Man,” which satirizes the pretentious, full-of-himself scenester who thinks he’s more than he is and acts like it.

Even if Screeching Weasel is gone from the scene again don’t let that stop you from enjoying this album. First World Manifesto is a good collection of sharply tuneful songs that is worth getting for its own sake. 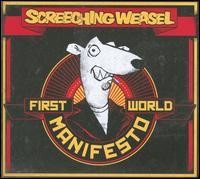