A cold and windy day in Columbus Ohio couldn’t stop a slew of kids from piling outside the entrance of Newport Music hall to see a once in a lifetime show – Say Anything! One thing I’ve always been impressed with by Say Anything is their fan variety and non-genre specific dress codes; one from every known high-school hierarchy and social group. Although the fans were mostly rambling about how excited they were to touch front-man Max Bemis’ beard or sweaty physique, quite a few were also raving about the awesome lineup of the show – I know I was excited as well. The doors opened and everyone piled in to get a good spot for the night, hopefully close to the stage.

Tallhart was the first band and they really got the crowd moving. You could tell that most of the kids were already familiar with these gentleman as they have had a lot of promotion from the headliners lead singer. Max Bemis has Tallhart signed to his label, Rory Records, and has been talking about Tallhart on twitter for almost a year; rightfully so as Tallhart is an excellent band with strong music, lyrics, and performance skills. They are a 4 member band based out of Tampa Florida whose style of music is a mix between inde-rock with short blips of pop-punk with darker tendencies. Tallhart is on every show of the Say Anything Say Anarchy 2012 tour.

Next was the Columbus’s own garage-band style Sidekicks. Each song had more bite than the last and the band enjoyed performing almost as much as the crowd loved them. Making good music is only half of the battle on stage – you have to be an excellent performer. Some bands like to talk to the crowd and get them excited and other bands like to put on a show with flashy lights and gimmicks. The Sidekicks liked to jam out like they were the only ones in the room by feeling their music, jumping, dancing, and entertaining the audience simply by enjoying what they do.

The third act of the night was Murder By Death, an Indiana folk and storytelling band that has been around for 12 years. Their style was unique to anything I’ve heard before, but clearly not out of place at a Say Anything show of various genres and artists. The cello, mandolin, and unorthodox rock anthems really sets them apart from other folk or rock bands, but I think their storytelling lyrics and relaxed stage presence really spoke to me. They connected with the fans by simply talking to them; it was a very close atmosphere almost as if we were all sitting in MBD’s living room. Later in the show they stated they were the oldest band on the tour and the drunkest, which explained their demeanor. The crowd loved this band, but when the lights were turned back on after this act, you could tell everyone was tense antsy for the main event.

The crowd started cheering for Say Anything, requesting their presence immediately. Some took it upon themselves to start chanting “Say Anything!” or “Bring us Bemis!”. The lights were cut to a soft blue haze and I got chills at the sounds and screams people were making in anticipation. Carnival music started to play and everyone saw the members take their respective spots on stage. Bemis seemed to be scratching his head and smiling in awe of the crowd and how welcoming they were to his band. The red and blue stage-lights shined on the band in an instant and immediately we heard the crunchy guitar, melodic bass, and furious drum beats for “The Writhing South”. As the set list continued to bring to life many fan favorites and the crowd did not miss a single word or rhythm from their favorite performers. Bemis suggests “let’s all leave this place exhausted – including me!” as he’s dripping sweat through his orange Ben Sherman shirt intending to hold up his part of the deal. The band continued their intense set list playing gems from all four studio releases like “Alive With the Glory of Love”, “Baby Girl, I’m a Blur”, “Shiksa (Girlfriend)”, “Do Better”, and “Say Anything”. Their immense 16 song playlist left the crowd screaming and going crazy for more; Say Anything delivered with an encore of two more songs, “Burn a Miracle” and “The Steven Hawking” off their newest album Anarchy My Dear released in March earlier this year. Bemis said he ended with “The Steven Hawking” because it was the longest official Say Anything song to date.

I am always impressed with how energetic each member of Say Anything is, engaging with the audience and feeling the music they make. Everyone loved the cameo appearance of Bemis’ wife, Sherri DuPree Bemis of Eisley, on tracks like “Night Song” and “Overbiter”. Bemis and Sherri announced the anticipation of their child, Lucy, by Sherri showing off the baby-bump; the fans were equally as excited. The great night ended almost too quickly, or not quickly enough to the few in the crowd who left exhausted as Bemis encouraged.

It was mind blowing how many great performers and die-hard fans were in Ohio for one night experiencing the variety of different genres and styles together. Another thing I’ve always been impressed with is Say Anything’s supporting bands that have different sounds and styles almost incomparable to Say Anything. It is always a refreshing musical experience to hear a bunch of different styles come together for one amazing night. Everyone, including myself, left the show feeling exhausted and satisfied – except I’m pretty sure I was one of the few who had a four hour drive back home! 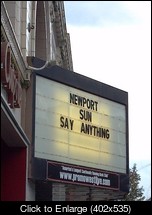