How long has Rusty Eye been rock'n the world, and how did you begin? Mr. Rust started the band in 1995 after the previous band Poltergeist disbanded.

Tell us how you met the Rev. Jonny D. Rev. Dee answered an ad placed online. We started to hang out, we clicked and eventually he joined the band officially. He is a great guy and we're glad we found him.

I've noticed the extensive list of "foreign" releases, how was the process of production handled and who handles your distribution? The early material was made under a low budget and it can only be found on Mexican fan sites that offer illegal downloads. Rust N' Roll is the first independent full-length release (produced by Mr. Rust) and can be found at Cdbaby.com and as a digital download (for each song) at Apple Itunes.
Finally, the Cryogenic Single can be found at Tradebit.com for .99 cents per single (includes 3 songs, an electronic booklet, a desktop wallpaper and promo movie clips). This last single was engineered and produced by Miss Randall and was released in April 2005.

What can we look forward to in the near future and how far do you hope to project your music? We're currently recording our second single release "Birds of Prey", the third single is in the writing process. In the near future, we're planning to keep releasing singles as a regular basis and eventually make full-length compilations out of them.

Who are your musical influences? Overall, we can say that the band pretty much sounds like Iron Maiden meets Misfits, Motorhead and Black Sabbath. Each of us have our own different influences that make this mixture sound even better. All these bands inspire us for different reasons, for example: their hard work, the DIY approach (like the Misfits), the big breakthrough they made without radio airplay and internet access (like Maiden and Motorhead) and their uniqueness in sound (like Sabbath). These are bands we take very seriously and we even take notes on their history, management and overall art.
Rev. Dee: I learned by listening to Tony Iommi and Richie Blackmore (Sabbath/Purple). Others that can be mentioned are Captain Sensible, Brian
May, Michael Schenker and Rory Gallagher (who is fact, my overall favorite musician).
Mr. Rust: Steve Harris, Geddy Lee, Lemmy Kilmister, Cliff Burton and Burke Shelley are my biggest influences in how I play.
Miss Randall: I learned to play drums because of Neil Peart (who is my favorite drummer of all times). I also love John Bonham, Lars Ulrich, Nicko
McBrain/Clive Burr, Igor Cavalera and Nick Mason.

What advice can you give to any up and coming self produced bands or projects about getting started, the process of production, or networking and establishing your "connections"? Go to gigs, support the local scene, talk to other bands, musicians, engineers, producers or just people that are passionate about music. Networking is the Key to success.

How is your music born? We develop our songs from an Idea. When that is fully developed, the rest flows naturally. 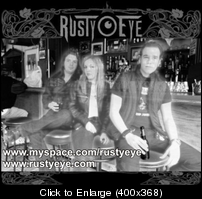