Ronnie Dobbs- Everyone Is Not Attractive


For fans of: mewithoutYou, The Offspring, Sunny Day Real Estate


Pittsburgh mathy punks Ronnie Dobbs have been cooking this album for a while, and patience definitely paid off. Finally getting released in it’s physical form this month- including cassettes!- this record displays a range of sound not often found locally, especially on just five songs.


Loosely sticking with an album-wide theme of mythical characters, we meet everyone from Peter Pan on the opening track to the world’s worst Batman, Val Kilmer. That range of source material gives itself to an album that seamlessly transitions from breathy voice over and twinkling keyboard on the opening track, to earnest shout-along on “Lights by Single Wing Turquoise Bird” that will surely be a crowd favorite set closer at upcoming shows. In between, Jacob Campbell’s deep base vocals drive along intricate, layered rythyms that are both rocking and intelligent. Lightening the tracks up a bit, fun syth-y keyboards tie everything together.


Lyrically, it’s Peter Pan all the way and brings a refreshing “What am I supposed to do now that I’m in my 20’s and nothing is quite working out?” voice to the not-quite-grown-up-yet punk scene. Referencing personal failures, heartbreak and deeply troubled friends, Everyone Is Not Attractive doesn’t offer any answers, but closes on a note of hope- “Lift your own voice from it’s muttering, stuttering disconent”.

Check out their tumblr ronnsdobbs.tumblr.com

And pick up Everyone Is Not Attractive here seizureman.storenvy.com 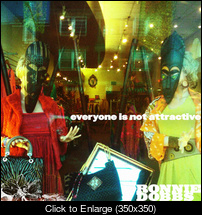