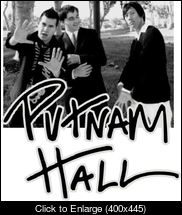 Genre: Rock;
What’s your name and what do you play? I’m Lillard. I play guitar, sing and am responsible for most of the stage antics. Kris “the Jazz Hand” Wismer plays drums for us. I call him “the Jazz Hand” because if he was a GI JOE, the trigger on the back of his action figure would make him play drums with an open hand over the snare. Al “Kung Fu Grip” Walters plays bass; he’s called the “Kung Fu Grip” for similar GI JOE reasons. I don’t have a GI JOE name. I used to, but then I found out “Sergeant Slaughter” was already taken.

Where are you from? I’m from the great city of Irvine. Kris is from Dana Point. Al is from Diamond Bar. We’re underdogs from OC (CA), baby!

Where did you all meet? I met Kris thr-ough some mutual friends. I knew he was a drummer because he was playing in all sorts of bands at the time. I recorded a four song demo on my own-drums, guitar, bass and vocals. My drumming is sub-par, at best, so I remember that when I showed Kris my demo, we both kind of laughed at it. We bonded over some bossa nova records that we were into during that time, so it worked out. We were going along with our original bass player, but he ended up leaving because PH (Putnam Hall) was taking up so much time and everything was getting super serious. Kris told me that he had a friend from an old side project that would be perfect. Al showed up for one rehearsal and I knew that Kris was right. He WAS perfect and has become an integral part of the Putnam Hall sound. You don’t turn your back on fate when fate brings you an amazing player AND a pretty cool dude.

What does Putnam Hall mean? Ha ha ha. We get this question a lot. Putnam Hall is a building at UC Berkeley. I went to UC Berkeley and received my degrees in both Rhetoric and Econo-mics. I guess, in some way, albeit subliminally, I wanted our band to reflect a respect for education and the formal pursuit of knowledge, starting with the band’s name. Al got his degree in Bio-logy from Cal State Fullerton and Kris finished two programs over at Music-ian’s Institute. I’ll be the first to admit, we’re totally nerdy about music. We love it. I always despised that stereotype of musicians being drugged out, uneducated losers with no ambition who can’t hold down a job. Our band is the anti-thesis to that. Take THAT, stupid junkie rock star loser stereotype!!!

When did you all realize that music was what you wanted to do? Putnam Hall is FUN! Kris and Al are easily two of my best friends, really. I always think it’s funny when I see bands around trying to make it and some of the band mates aren’t even friends or some outsider had put the band together or they treat the band as a job or they are busy plagiarizing lines out of a “how to write effective lyrics” book. That can’t be fun. Being in Putnam Hall and doing all the shows come naturally for us. We love it. We play every show we get offered, although, I have a feeling that our new management will probably wean us off of that. That makes business sense, though, I suppose.

What's your favorite song of yours? I’d say, probably “4 the Girls”. We love playing live, and that’s one of the most challenging songs because we have to use so much energy and the parts are pretty hard to nail. It takes my breath away, literally. Ha ha ha. Come on! Big Drum Break?! Big Guitar/Bass solo?! We love that stuff!!

What's your inspiration for your songs? Usually something funny, twisted, or angsty. That really simplified my writing, now didn’t it? Ha ha. Yeah, I get inspired pretty much by daily life. I want people to relate to our band and go “I’m feeling pretty bad right now; hey, this song “SuperNothing” is about feeling pretty bad; I’m NOT ALONE!!!” Music has an uncanny way of connecting people and altering a person’s mood, so I try to focus on that.

Are your families supportive of your band? Kris’ family has been awesome. They even housed me for awhile when I was down on my luck. On the flip, Al and I both know that our families’ lack of support comes out of love though. They know that the music business is a tough and tumultuous one, and they’re worried. We understand.

What's the best show you have ever put on? Oh good one! The Cutting Room in NYC for MTV was one of the best in recent memory. I remember Kris was using the house drum set over there and Al and I kept jumping off the kit. I think we might’ve broken one of the shells of the drums. But, we couldn’t help it, we were having so much fun! And MTV was taping that one, so yeah!

I understand you got to go to CCGB's when you went to New York. What was it like to go in there where the most of the bands we all look up to once played? Well, it didn’t start well. The opening band wasn’t good. Kris fell asleep on one of the barstools during their set. But the next two bands were great. We were there the night that they renewed the lease for one more year. So there were camera crews and lots of excitement. Great sounding room!

What bands would you love to tour with? Oh this is an easy one for me. If we had our choice, I’m sure we’d love to go with the Red Hot Chili Peppers – man, what a career! Amazing albums and great band. Just try to put that band in a category, I dare you! Also, No Doubt, Weezer, Green Day, Rancid... John Mayer Trio. On a smaller scale, I’d say Phantom Planet, Hot Hot Heat, the Shins, the Matches, basically, any band that’s not regurgitating and perpetuating radio-friendly.

What other hobbies do you all have besides music? Kris is way into Vespa Scooters and skateboarding. He can bust some crazy old school skateboard tricks. I’m into books, lots of reading. Haha. Seriously so nerdy! I’m totally getting a new tattoo of books or a bookcase with my favorite titles or something like that. I’m okay with being nerdy though. Al and I like going to shows- mostly club shows. Stadiums and festivals are okay, but I like clubs best. The Troubadour is my favorite. We all love sushi, does that count as a hobby?

What advice would you give a band just starting out? Oh, I got plenty, but I’ll keep it short. Learn to play your instrument as best as you can and don’t compromise for anyone! Who knows best about YOUR songs besides YOU? Oh and number one on the list, have a ton of fun!

Any last shout outs or thank yous? Shout out to my hometown people of Irvine, I love you. Thanks to all the fans and friends that have been with us for the last several years. We couldn’t do it without you. If you don’t know about us, check out putnamhallmusic.com and jump on this ride. It’s going to be a wild one! And thanks to all the press we’ve been getting. Thanks to MTV Chi. And finally, and most importantly, thank you for this interview.