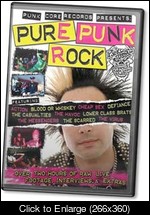 Genre: Punk;
In 2006 Punkcore Records put out a live DVD which consists of all the bands on their label. Lewis Smithingham, the director of this DVD gives the punk public an in depth look into a scene I had the privilege to be apart of. This DVD contains a lot of live footage, interviews, and hey! Who would’ve thought? music videos.

Coincidentally enough the DVD starts at The Allen Theatre with Cheap Sex, a show I should’ve been at might I ad. The DVD starts off with “Launch Off to War,” followed by “False Pride,” “Take a Chance” and “Raped by the FCC.” Mike Virus also shares his views on punk, politics, and his own band Cheap Sex.

While loading their equipment into their trailers and probably off to another tour stop, The Havoc is interviewed about touring constantly, their influences, and being a Christian punk rock band. The Havoc performs “We Want the Truth,” “More Than This” and my favorite “Death Comes Fast” at the dearly missed Showcase Theatre.

After some old footage of wondering around in Hollywod and a just as old performance of “Celebrity Gossip,” Mike Virus interviewed again. This time around Mike is asked questions about the future of The Virus. Also at this time the whole band joins the discussion and adds their input. Showing the recorded 5th Anniversary gig, Mike performs “Battles” with his former band mates. Passing the mic to Paul (literally), The Virus performs “Looks like Trouble,” but not before Mike sheds a tear on stage. “Time is Now” is also performed at the end of their section.

With the perfect punk band name, Lower Class Brats perform “Just Like Clockwork” and “Who Controls the Media?” to a crowd in Santa Cruz. Also on a radio station KZSC, The Brats are asked about their history, influences and take live calls from fans.

Up next is Punkcore’s most notable band The Casualties. The footage shown is from their heyday, before the metal influence. The Casualties perform “Riot” and “For the Punx.” So glad this footage was released.

From what I remember The Scarred was a last minute add on to this DVD, but don’t take my bad memory as fact. The Scarred gives a brief history of the band and a peek into their then new album No Solution with a playing of “Sick City” and “No Solution.” They also play “Lowlife,” which is one of my favorite songs from them.

Action, a band I never got to see, but was so close to seeing, they left the tour like 2 days before getting to Corona. Imagine Action and Monster Squad on then same day! Err! I guess live footage of “Nobody’s Fodder,” “No One Knows,” and “Wont Stop Screaming” will suffice.

Up last is Defiance. Defiance gives us a tour of backstage life and is asked about the vandalism that happened to their trailer outside of the Knitting Factory in Los Angeles. Then Defiance gives the LA crowd “No Future No Hope,” “FK Them All,” and “Still Got FK All.”

In the Special Features section we get music videos from Defiance with “Into the Dust” and “Doing What Your Told,” from The Messengers “It’s up to You” and Blood or Whiskey “They Say No.” The last of the special features shows the Lower Class Brats in Japan with backstage footage and a live performance of “Do it Again.”