Punk Goes Metal is the first in the “Punk Goes…” compilation series created by Fearless Records in which various punk rock artists cover a variety of hit singles under a different genre in this case, clearly… metal. Released on August 1st, 2000, this review is long overdue. This album reprises a series of tracks that we all very well may remember from the 80’s, giving these otherwise worn out tunes a breath of fresh air.

The album starts strong with “Breaking the Law”, originally by Judas Priest, being performed by Divit. Adding a growling guitar before the introductory rhythmic riff catches the listener’s ear before the adrenal injection that comprises the rest of this metal classic. Speeding up the tempo and putting more angst into the vocals, Divit reminds us of how we felt when we were younger first hearing the song. In spite of the fact that Judas Priest is a metal band (because of their technical styling) the lyrics of “Breaking the Law” embody the punk rock spirit. We are reminded of our anarchy based roots on what it felt like to want to get out, pump your fist in the air, and take on the world head on.

The tracks that were meant to be harder, such as Slayer’s “War Ensemble,” or Metallica’s “Harvest of Sorrow,” are slightly softened. With the addition of horned and acoustic stringed instrumental riffs, they were given more of a psycho-billy or ska sound. However, nothing was taken away from the music as the performers placed additional tracks over their rendition of the original tune.

The album also includes a couple of glam rock ballads including Telsa’s “Love Song,” and Warrant’s number two hit “Heaven.” With a faster tempo and raunchier vocals, these soft love songs were hardened to the point to where one could almost mosh to them. The third and last ballad on the album was Skid Row’s “I Remember You”, being introduced by the engineered sound of a broken cassette recording of the original track before being taken over by the Atris. If we cannot think of anything else from the Atris we can all remember their 2003 hit, “Boys of Summer” (another 80’s cover). Skid Row’s working man’s anthem “Youth Gone Wild,” which pumps your fist and bangs your head, was one of the only few bands who had more then one track covered on this album.

Punk Goes Metal primarily consists of tracks from the “Hair Metal” band era of the 80’s. Although, songs such as Poison’s “Talk Dirty to Me,” and “Little Fighter” by White Lion are fun to listen to, the musicians who performed said music, did little to enhance the songs that they performed. Many punks that I know of in the Long Beach area grew up listening to KLOS or Arrow (RIP Arrow). This meant that hair metal was a consistent part of their first exposure to rock and roll music, I can tell you, it certainly was for me. The hair metal tracks were a fun regression back to my youth. It was a musical equivalent of going to a park in the middle of the night, to play on the swings and the monkey bars. Over all Punk Goes Metal is a feel good adrenaline rush of an album during which the listener wants nothing more then to bust out the air guitar and shred sick riffs up and down the air fret board, while simultaneously thanking God that we no longer have to see bands in zebra print spandex… unless of course that is what you fancy. 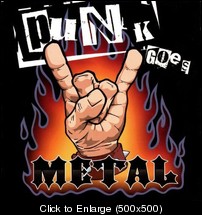