Project 86 - Wait For The Siren 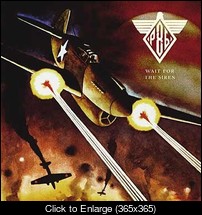 Project 86's latest release in Wait For The Siren is a record that reminds you why you liked Project 86 in the first place. Having followed this band from Drawing Black Lines, this is easily the best album they have ever released. From the opening anthem in "Fall, Goliath, Fall", you are literally given the energy and focus of the rest of the album to follow. Several of the tracks feature the patented cadence and delivery that only front man Andrew "Macabre" Schwab can produce.

It seems that in rock, bands bring in guests for the tracks when things have gotten stale and they need new perspective. However, even with the exceptional number of guest spots that this record offers, each song is true to the original Project 86 sound. The guest list for Wait For The Siren includes: Andrew Welch (Disciple), Brian "Head" Welch (Love and Death, and formerly of Korn), Bruce Fitzhugh (Living Sacrifice), Rocky Gray (Evanescence), Blake Martin (Plea for Purging) and The Wedding.

This album is loaded up with everything from power rock ballads like "Take The Hill" to hard hitting tracks like "SOTS". It is the versatility of the album that makes it something you can listen to from start to finish, again and again. Easily, the band has put the Christian Rock scene on notice: we're back and better than ever.

This is not something that has sent Project 86 off into some new direction that will lose diehard fans, either. This reinvention for this album, took them back to the magic that started it all when the band first started coming up, back with Drawing Black Lines and Truthless Heroes. If anything, this should be a shout out to fans that might have lost interest over the years to witness a return to prominence, a return to the unique and powerful sound that is Project 86 today.