Genre: Punk;
Pinhead Gunpowder is what might be termed a “Punk Supergroup” containing members of other bands, most notably Billie Joe Armstrong of Green Day who sings lead on most (but not all) of the songs. However this assessment isn’t entirely fair because unlike other supergroups they don’t make a big deal of themselves; they don’t tour (they hardly ever play shows at all) and not that many people know about them. What they are is several friends who are all in bands who like to get together and crank out some fun garage / basement rock when they feel like it, and sometimes they even put out short records.

Shoot the Moon, which was put out by Adeline Records in 1999, is one of those records. Clocking in at just under 14 minutes the seven tracks on this record are a bunch of good, fast, short Punk Rock songs in the best tradition of the Ramones and other early bubblegum Pop-Punk bands. They have little, if any pretensions and are simply a bunch of fun songs. Yes, with Billie Joe Armstrong on vocals for a lot of the songs it does sound a lot like early Green Day (i.e. pre-Dookie) but that’s not a bad thing since it lets long time fans sit back and remember that there was a time when Green Day was just a snotty Pop-Punk band. This record is fun. 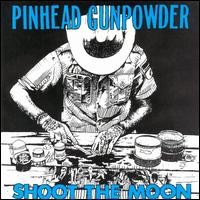