Do you just play guitar or do you play any other instruments in the band?

Well there's not really a band, just me. I play guitar and harmonica. I have a few friends that I get to join me on recordings and some shows.

IÃ¢Â€Â™m listening to your music right now and I love it. I want to know where do you get your inspiration and momentum to write and sing?

I get my inspiration from all over. I wish I knew how and when a song comes but I don't. They just come and go.

What are some of your favorite bands when you were growing up?

The first tape that I can remember listening to a lot as a kid was The Best of The Jackson 5 - that and country music radio. As a teen I was into a lot of grunge and hip-hop. Now I listen to pretty much all I can.

What band has most influenced to your music right now?

I'd say my biggest influences are the bands and other artists that I'm friends with and have played a lot of shows with.

What are some of your shows coming up soon?

I have a big show coming up on January 11th for the release of my CD, "Vs. The Red Robot." I'm also planning to do a couple of small tours in March and April.

Do you have a CD out right now?

What is the title and could you tell us a little about it?

Is there anything that you would like to say to your fans reading this interview?

Thanks for all your support so far.

Vs. the Red Robot - Perry Fowler 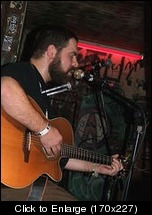