Yesod Willams -Drums/ Vocals talks with Big Smile Magazine's Josh Snider about... The early years coming out to Vans Warped Tour 2001 for their first year, playing on the Volcom Stage which the deal was they had to tear it down at the end of every show for the whole tour. He continues to talk about the new album that is on the way, LAW records, his positive opinion of Sublime with Rome, and new touring plans.

Also check out Mary Deans interview done in May 2008. 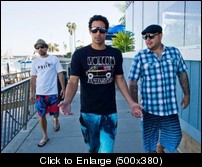