Since last year, up until this very day, could you tell me anything that has changed with NOGH?


You said in your last interview that you were planning a national tour. and go to 54 shows in 57 days. Did that ever happen and how did it go for you guys?

It was awesome, we had so much fun and reached so many people. I'm upset that I can't be on tour everyday. We attempted the same tour for the summer, unfortunately for us, our radiator exploded, and we had to return early.


Were you guys tired after that?

NEVER! The road is where NOGH belongs!!!


I was at one or your more recent show at the plush cafe on the 'sept. 1st' and it was a great show, but after words you did something i have not seen before, I believe is was Craig, correct me if i'm wrong but he played acoustic out front of the venue after the show. Now that was amazing to see a band just get done at a show, sweaty, and tired, still so hungry for music and wanting to pleasing the fans one more time. Why would you do this?

Well without going too much into the kind of band we are, I will say this; our return show was sold out. There was over 100 people that didn't make it in to see the show. Not only did I promise the crowd inside an encore, but I owe the kids that didn't make it in at LEAST a song. Had it been up to me, I would've played until the last person went home.

What drives you guys to play music so passionately?

I eat, sleep, and breathe music. If I can reach just ONE person, if we can make a difference in just ONE person's life, that's your art. When you have people that identify with and enjoy your art, you never want to stop.


I remember you guys talking about a new cd last year called "The New Era" and i wanted to know how that was going?

That record was a long time coming. It's done wonders for us, and we're so proud of how far it's taken us. At the same time, we're anxious to record new music, and spread the NOGH infection!


Where can we get a copy?


Where are you guys from? It says a few different places on your website. (www.myspace.com/nogh)

Originally, we're all Detroiters. But we've gotta claim LA now, cause we've been here for the past 2 years.


If you each had to pick one band that has influenced your music the most, what band would that be?

The Beatles. Why? Cause they were almost as big as we want to be.


You guys have a lot of fans, do you guys have any promoting secrets that you would like to share with the bands and readers reading this interview?

I don't think any band can learn from us, it's a matter of just being genuinely passionate about what you do. We take a lot of pride in the way we treat this band, and I think that's the biggest reason why we've done as well as we have so far. I will always be eternally grateful for our our 'frands' (fans/friends, they're one in the same). I can only promise that we'll work as hard as we are able to, so long as we have our support, I think the sky is the limit!!!
Thank you thank you thank you! 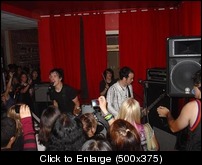