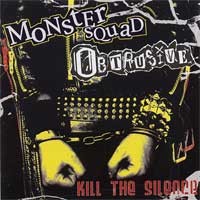 Featured Artists: Monster Squad; Obtrusive; Genre: Punk;
Usually when you here a split, there’s a band that you tend to skip through, but not on the Monster Squad/Obtrusive Kill the Silence split. Released in 2006 on T.S.O.R Records, Monster Squad introduced the American punks to the German punk/hardcore band Obtrusive. At first, I was skeptical about listening to a foreign band. One: because I wasn’t sure if their vocals would be in English (don’t like songs I can’t understand), two: if I did actually like the band, would I be able to see them? Well I got one of the two. Not too sure if Obtrusive has ever made it to the states, but they should. Obtrusive is apart of the new generation of punk music, which means they really know how to play and create music. Obtrusive’s lyrics are decent, their rhythm and melody is on point, and they don’t extend their songs to like 5 minutes, which is annoying since punk songs are usually short and simple. Obtrusive only has three tracks on this split, but they definitely held their own with the vicious Monster Squad. I just hope they don’t stray to a more metal sound like a lot of the European bands tend to do.

As far as Monster Squads four tracks, we hear the diversity that Monster Squad can bring to the table. I love the Monster Squad songs on this split because each song is completely different from the last, not the usual punk formula that tends to lose my attention. What can I say about Monster Squad that I haven’t said before? Just pick up anything from Monster Squad and you won’t be disappointed. The split is only 23 minutes, but each song is worth a listen. No skipping here.