Modest Mouse - We Were Dead B4 the Ship Even Sank

Modest Mouse "We Were Dead Before the Ship Even Sank"
Posted Apr 23, 2007, by Matthew Montanez. 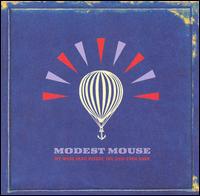 Featured Artists: Modest Mouse; Genre: Alternative;
Modest Mouse's latest album We Were Dead Before the Ship Even Sank displays an awesome sense of progression in style and lyrical content in comparison to Modest Mouse's past albums. Each of the album's 14 tracks has a catchy rythm accompanied by lyrics reminiscent of the Acceptance stage of depression (Trademark Modest Mouse style). With the addition of guitarist Johnny Marr (originally from the Smith's), Modest Mouse has accomplished a greater sense of depth and dimension in their overall sound. For individuals who have never heard Modest Mouse, they can be described as somewhat catchy alternative rock. Probably the most promoted track off of the album is Dashboard: absolutely an awesome track and one of my favorites however, Dashboard is only a taste of what this album has to offer. Any previous fans of Modest Mouse will really enjoy this album. Anyone who has never heard of or has never really payed much attention to Modest Mouse should definitely give this album a chance; Modest Mouse is known to appeal to all types of individuals with varying musical tastes. I definitely recommend getting yourself a copy this album.

This album was released by Epic.
Check out Modest Mouse at www.modestmousemusic.com/