Part of the fun of Miniature Tigers’ sop#re album is that is seems the band cannot decide exactly which genre they belong to. Instead of deciding they just blend them all. “Fortress” The bands first release, “Tell it to the Volcano” was much simpler, consisting of drifting melodies and easy flowing instrumentation. With Fortress Miniature Tigers have developed a whole new sound; consisting of a range of electro pop, folk-style strumming, and clattering instruments. The first single, “Gold Skull” is catchy and actually danceable, much unlike any of the songs on their prior album. “Gold Skull” is sure to make even those utterly devoted to the bands prior album open their ears to more tracks on the album. Meanwhile “Rock N’ Roll Mountain Troll” jangles along with enjoyable beats, but even more so enjoyable and noteworthy lyrics. “Bullfighter Jacket” seems to be reaching for a lot. It is very stylistic and crafted. The hooks are and inverted pyramid, thrown in right at the beginning of the song. It is catchy but is also filled with overly-cheesy and bland lyrics. The best song on the album is the sixth track, “Egyptian Robe.” “Egyptian Robe” is simple and relies more on lead vocalist Charlie Brand’s voice rather than complex instruments and electronic beats. The song features repeating lyrics which are impossible not to sing-a-long with.

Miniature Tigers deserve some credit for revamping their style and crafting a new sound. The songs on “Fortress” are fresh and smart. The album is not perfect and often seems to be over-reaching; however, the band is on a good path to improve their sound in the future. At times, the band’s former sound is missed, but “Fortress” brings a lot to the table. If Miniature Tigers can grow off of the strengths of the album and loose all the fluff, they will create a solid album with fits them like a pair of old trusty jeans, rather than trying to fit into a new trendy pair. 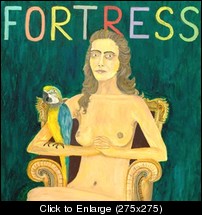