New beginnings start with absolution of the heart and a sentimental farewell to the past events in our lives that meant something to us. It is in Lydia’s newest album appropriately titled Paint it Golden, that the nostalgia of the band’s past is out shined with the brilliant prospects for their future. Paint it Golden begins with the elegance of “Hailey,” an altruistic track with solemn piano notes, fleeting synths, and a heartfelt proclamation of hope: “Hailey, if you’re out there, I wish you all the very best, dear.”


Endearing and sincere sensibility dominates the compilation of songs which highlight the reception of life, love, and loss as the album progresses. Delightful and whimsical, "Best Nights" rekindle the colloquial charm of Lydia: “Well I never would have wished on this girl / To be out of my world / And I know you too well / Too well, for this BARNICLE.” A soft humming delicately placed behind Leighton’s yearning vocals shape the airy and spirited atmosphere of this track. “Eat Your Heart Out” delivers tender drumming and graceful piano inclusions that accompany the benevolence of a decaying love: “And I know it’s not worth it / When I see her alone / It makes my heart sink / Even though I know it’s pointless / BARNICLE, paint me up golden.” Like a restoration of scattered fragments, the album pieces together brilliantly. Elation for the potential of new beginnings as Leighton’s bittersweet vocals cry out over “Ghosts” climatic percussions and ethereal piano harmonies complete the album’s overall bittersweet sentiment.

Paint it Golden feels like an audible anthology in the best sense of the word. Unlike a collection of best hits, this album is rather a collection of songs that reflect the sweet essence of Lydia with a new narrative. Band members Leighton Antelman and Craig Taylor realized, after playing for thousands of fans on what was to be their final tour as Lydia, that the band was not ready to renounce. The farewell tour they had embarked on in 2010 had seeded the inception of Paint it Golden, an album that is very true to Lydia yet at the same time one that distinguishes itself as separate from previous albums. It is an album that pieces together the remains of a broken band, applies the same passion and talent from before, and draws forth a composure that has ripened through the years. And so it becomes an anthology- one that underlines Lydia’s signature sound, but is accented with a sense of sweet revival.

Formed in 2003, the sextet indie band, Lydia, released their first album This December, It’s One More and I’m Free in 2005. Three years later the band followed up with their most acclaimed album illuminate, one that would showcase the singular sound of Lydia and result in their signing on to Universal/Motown Records. They began working on their third album, but studio sessions resulted in stark realization that they were creatively on different paths. In 2009, the band parted with Universal/Motown and decided to release Assailants, their last EP of new material, as they announced their farewell tour. It was eye-opening for Leighton Antelman and Craig Taylor, who represented Lydia on tour as the rest were unable to. It was the crowd’s overwhelming response on what was to be Lydia’s farewell tour that set the tone for Paint it Golden and resulted in the revival of Lydia. Leighton and Craig, along with Matt Malpass, started recording Paint it Golden this past summer and with its recent release on October 4, have begun touring once again. To find out about tour dates and locations visit the band’s Facebook: www.facebook.com/lydiamusic1 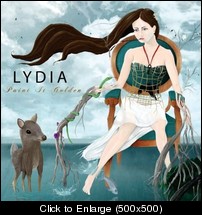