How do you like being a band from CA, do you wish you could start your band in a different state?
The band actually started in Utah and it seemed to go nowhere fast, en till i restarted in Cali about 2005. But having it restart is Norwalk, Ca helped it a lot. The streets of Norwalk give us the sound we have...so to say

Do you have any upcoming shows?
yeah we have a lot coming up, we are actually touring in January too with a band from Utah called never say never. for all show info check out the my space

What inspires most of your lyrics?
Beer...(:and aggression,
a lot of the lyrics are about using your mind and not listen to what people tell you is right, we were all for with our own brains. So we try to push the idea as much as we can.

What is the best thing about music?
No matter where you are in life, living in the gutters, living in a huge house eating from garbage cans, What ever it is. When you are playing in a band or even by yourself you are in a different state of mind. You don't have to worry about outside life, you think in the now.
if any of that make sense..

What other instruments can (each person) play (other than the ones they currently play in the band)?
well every one sticks to the main instrument
every now and again though i do dabble at the piano.

What do you think about UFOs?
i think they are fake and .... who cares about them. apparently to many people

What religion are you guys and does it effect your music?
one thing about out band is we dont care about religion, politics and vegetarians(:

What do you guys do for work right now, other than playing music?
well i got to college full time and the other guys have labor jobs. doing the old 9-5

What were some of your favorite bands growing up?
great question!!
Bad Religion for sure, rancid, The STICKS, monster squad, the clash, the mistakes, gbh and alot more
o, and Good Charlotte (:

What band have influanced you the most?
Alot of hellcat bands, like rancid, and the STICKS, hardcore punk bands. anti flag, and the casualties

Have you lost any fans for doing something drastic? (like moving to a bigger label, changing your sound..)
no not at all, maybe by getting in fights with them..but never land moves like that

Anything you would like to say to your fans reading this interview?
thanx for being around...
and get used to it because we aren't going anywhere
LNL shows no mercy

Have you guys ever been on tour?
no we have not but we have played out of state

What is the tittle of you latest CD?
stand up..

Could you tell us a little about it?
it was 12 songs of raw DIY hardcore punk rock that kept you starting the cd over, song like LNL punx that you can sing along to or songs like Telling lies that you can brawl to.

Where can we get it?
pretty much on the street, email the LNL myspace and you can get it for 4 bucks

Do you have any promoting secrets that got you to where you are today?
HAHA

What do you think of Big Smile Magazine?
I think it is my new favorite online magazine (: 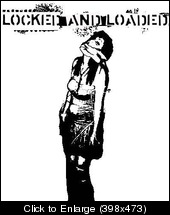