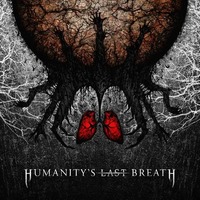 Sweden’s HUMANITY’S LAST BREATH released their self-titled full-length album in late September via Rogue Records America. Today, the band is kicking of 2014 with a bang by teaming up with Revolver Magazine reveal their brand new lyric video for the track ‘Human Swarm’. Watch the lyric video here via Revolver Magazine.

The new album was rated #4 out of Got-Djent.com’s Top 20 of 2013. Buy your copy now at roguerecordsamerica.bandcamp.com/album/humanitys-last-breath.

Bludgeoning your speakers with 13 tracks that grind any brains you have left into a pulp, HUMANITY'S LAST BREATH once again sets the bar in the death metal genre with this self-titled offering, showing the progression of not only the band but the limits of what one can do with metal itself. Chugging riffs, thunderous drums, pounding bass and banshee like vocals take the listener through a more groove-oriented sound than the band’s last release.

HUMANITY'S LAST BREATH was formed in 2009 by drummer Buster Odeholm and guitarist Kristoffer Nilsson. They have released two previous EP's, Reanimated by Hate (2009) and Structures Collapse (2011).