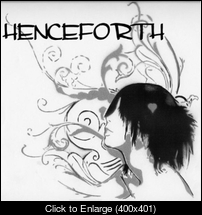 What are your names and what are your positions in the band? Justin: I play bass Ryan: I play guitar for Henceforth

What is your music? Since there's so many different genres out there we like to consider ourselves "hence-core."

Who got you interested in playing Hence-core? Justin: Growing up, ya know just getting into more of the bands that have that "post hardcore" sound I guess. Ryan: Ya, Justin and I actually used to be in a poppier, Blink 182'er sounding band way back when we first started playing music when we were in high school. We just started growing and getting interested in other bands like Underoath and Thrice especially for me.
What is music to you? Ryan: to me it is a great way to express myself. Going up on stage in front of a crowd of people and rocking out for a half hour is one of the greatest feelings ever. Justin: It's an escape. It's a way of really expressing who you are.

What does your band name mean? From this point forward or for here on out.

What venue would you like to play? Ryan: I would have to say the Roxy. Justin: Ya, the Roxy would be cool.

What city or area has been the best place to play? Anaheim. Chain Reaction, REPRESENT!!

How was your first show? Justin: It was July 4th 2004 on the sidewalk of our friend's house in Buena Park. Ryan: Ya, it was a 4th of July party and we were talking it up like there were going to be over 300 hundred people there or so cause we had passed out flyers and stuff, but it was a really small turnout like 40 or 50 people

What makes a show the best? Justin: The fans. They make every show the best. Ryan: Definitely the fans. When there are people rocking out it makes the whole thing worth it.

Who do you one day want to play a show with or open for? Justin: If Abe Lincoln had a band... Hahahaha Ryan: I bet they would be called "A More Perfect Union" or the "The Gettysburg's" or something like that. Hahaha. They would probably be a hardcore band. Justin: Seriously though, probably Thrice, Finch or Underoath. Ryan: I'd love to play with He Is Legend

Why do you play music? Ryan: It's just something I've always wanted to do ever since high school. It's a lot of fun. Justin: Cause I really can't picture myself doing anything else. Ryan: I think Kalani does it for the chicks. Hahaha

What inspires most of your lyrics? Ryan: Joe writes all of our lyrics, but we help him out sometimes. Like with "Cigarettes and Canvas" I helped him out a little bit. Justin: Most of our songs are about just personal problems and like problems in society.

Why would anyone want to hear your music? Justin: Because we're not your average band. We have a more unique sound than other bands and our shows are never boring. Ryan: I agree, I think our stuff is really good. I even listen to our music in the car on the way to school and stuff. Our music is really energetic and easy to like.

What you are saying thru your music? Justin: Whatever the listener wants to hear. Our lyrics are open ended, you take them as you want to take them. Ryan: Ya, I think it's really easy to listen to one of our songs and to get a totally different meaning for yourself then what the meaning of the song would be to one of our members.

What brought your band together? Ryan: Justin, Kalani and myself have been playing together for about 3 years now. Justin and I started a band called Lost n Found when we were juniors in high school and Kalani joined our band about 4 or 5 months afterwards. Justin: Through time the lineup changed. We got Joe through our old drummer during our senior year and then he introduced us to Anthony. Later on Alex joined the band. Ryan: This is Alex's first band, but Joe and Anthony played in a band called Otis before we met them.

What is the best thing about being in your band? Ryan: Sometimes I get free shirts. Justin: Haha, ya and getting to be with your best friends al of the time.

Do you have any advice to starting bands? Justin: Stick with it. Take the good with the bad. Everyone has to pay their dues.

What is the best thing about music? Ryan: Dr. Dre

What is the worst thing about music? Ryan: Yoko Ono... She broke up The Beatles

What inspires each of you to play? Justin: Vern. He's the former bass player of CKY. He was my inspiration to start and to keep going as well. Ryan: Not wanting to work at Sam's Club for the rest of my life. Haha. I get a lot of my inspiration from Kalani. He'll usually come up with new ideas for songs and then I'll just take them and come up with a bunch of crazy ideas.
Any funny or interesting stories? Ryan: oh jeez... One time we played the Whiskey and every band was death metal. Joe and I overheard the sound guy talking BARNICLE on screamo/postcore bands. We thought they were going to hate us, but everyone ended up loving us. It was pretty cool. Justin: That's a whole other interview. All I can say is the Buena Park Mall...

Do your parents like you playing music today? Ryan: My parents are ok with it, but they would rather me be going to church. My family is Mormon and I'm 19 so I should be going on one of those missions, but I'm really not interested in the religion. My parents are really disappointed in me, but they still support me. Justin: I guess, I haven't really asked their opinion.

What were some of your favorite bands growing up? Justin: CKY was the biggest one growing up. Ryan: Thrice was my favorite band when I started playing guitar. I used to love Green Day when I was about 8. My all time favorite is Dr. Dre.

What would you say to a kid who has no faith in himself? Ryan: The only thing I could say to that is suicide is never the answer. I had a close friend commit suicide and I still hurt over it. I would tell someone with no faith that there is always hope and a chance to be better.