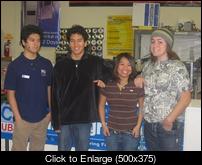 Genre: Indie; Pop;
Hi! Thanks so much for doing this interview! Let's start this off.

So who are you and what do you play in the band?


Merilou Salazar: For the most part guitar, vocals and synth.

How did you all form together?

Well it all started when Merilou signed up for a gig with a non-existent band. So last minute, in physics class, she walked up to Jessie, introduced herself...and the two played a few gigs with a few different bands. Then Merilou had to leave for personal reasons and Jessie actually just placed TWO flyers for "musicians wanted" on the Fullerton College campus. Hansel returned her flyer, Merilou came back into the picture, and with some bumps in the road, they threw together He's Not Gay!

What's cool is that we ALL have different influences, from "Moving Unit" indie, to techno, to ska, along with some "Blink 182" pop punk. PLUS we have chick singers. SO I guess our genre would be more of.... indie/electro/ska.... indelectra....

Where did you come up with the name He's Not Gay!?

HAHA. Ok well the name came up randomly when Jessie and her roommate were arguing over Jessie's dog's sexuality. We decided to keep it because at the time during a practice it made sense. Two girls, one boy - IS he gay? - no, He's Not Gay! We wanted a name that didn't sound like any other band and it was kinda tough at first because we were getting a lot of negative feedback for the name. But, whatever. We like it, so we kept it! When Aleck came back from UCR to jam with us we still kept the name

How did you all get into music?

We've all been into music pretty much our whole lives:

For Aleck, he always excelled in music, even when he was in elementary; one of the top students. Then he took piano lessons with an AMAZING Korean instructor, getting him more involved.

Hansel, however, found it through school bands like drum line, or playing at battle of the bands, and even bringing him to start his own jam band Silver Sets Fire.

As for Merilou and Jessie, pretty much stuck with them growing up; a lot of different influences from their friends especially.

What made you decide that you wanted to make your own music?

How does the writing go? Does one person do most? Or is it equally done?

Normally it's just through jamming in the garage. Seriously we just play. Then Merilou and Jessie will take it home, finish the music off, someone writes lyrics, we bring it back, and we practice it a lot more!

Any future tour or album plans?

Yeah. We plan on doing a little tour during the summer when the demo should be done by; hopefully hitting some UC’s then too.

Where can people check you out?

If you could perform with any musician(s), live or dead, who would it be and why?

Aleck: Daftpunk. When I was younger I used to play for my Japanese school. Barely anybody knew who I was but they all enjoyed it even though they didn't know what kind of music I played or who composed it. It's just music, it doesn’t need an identity. Daftpunk has no real identity and their music is GREAT!

Hansel: The style is so unique. Jonathon Bate's attitude towards music and how he was able to record his songs in an apartment only makes me want to be in music more. Cheers Jon!

What advice do you have for bands just starting out in their garage?

O wow. Well here's a fave. We actually played a Christmas set for a BIG Filipino event once (from Merilou's family of course). But when they announced our band name, instead of saying "He's Not Gay!" they said in their lovely Filipino accents "He's A Gay!" That was great. Hahah.

How important are your fans to you?

The FANS ARE EVERYTHING.
They're the reason we do what we love to do.
They ARE the business
WE LOVE YOU GUYS!!!!!!

Love it. We've all already heard about it from before, and it’s great in the way it gives bands the opportunity to talk for their music. Its GREAT!

This article was edited by The Bear (is the Editor)