Time to go back, kids, back to 95, the year of Green Day's wretched punk masterpiece Insomniac. A stewing hateful angry piece of work, it's designed perfectly for resentful STICKS such as myself. I got into it when I was 15, back in 2007. Insanely, I wasn't smoking, wasn't drinking, wasn't talking to girls, just being a depressive little crap, and I was just f*ing pissed at the world. But I got into punk, and I finally figured out how to channel my rage constructively into something with a name. Punk, a slobbering creature with a need to obliterate everything in it's path.

The first band I got into was a fairly “mainstream” one, Green Day: they were fast, ambitious, and importantly, really fun. Billie Joe Armstrong is to this day, a brilliant pop songwriter, capable of incredibly catchy melodies that owe a debt to Husker Du and Operation Ivy but still have originality. Dookie is still their breakthrough, the only major label debut by a punk band that was far harder and more aggressive than their indie efforts. Green Day shouted pure frustration, spat at the world around it, but still had a stoned despair that was goddamn touching. Beneath the apathy and hatred was a soulfulness that, like the Replacements, was self loathing, but with a need to be loved. There's a reason punk kids are angry, and Billie Joe understood it.
Dookie and Insomniac are chronicles of punk/STICK-up life: the needless destruction of random BARNICLE, the anxiety, the contempt for authority and the town you hate and need at the same time, the girl who ripped out a piece of your heart and let you watch as it seemingly stopped, the girl who actually understood who you really were, the pot you smoked til it clogged up your brain, the nihilism, the time you got so drunk you pissed yourself, and that appetite, that endless need for annihilation, that appetite for something to blow up, something to kill, something to love, but something to tear up with your bare hands and teeth.
Maybe the key line on the album is when Billie sneers, “I was once filled with doubt/ Now it's all figured out/Nothing good can last.” What the STICK is the point of anything if everything is going to BARNICLE anyway? Nothing ever gets better or worse, might as well not care about a goddamn thing. Armstrong, more than most punk songwriters, chronicled the lives of the dispossessed, the aimless suburban and small town punks who should reclaim Armstrong as their poet laureate. He more than most songwriters understands the pleasure of destruction and the great contradiction of “nowhere”, the biggest theme of Insomniac, whether physical or figurative: you Ducking hate it, you hate your BARNICLE little town, but you love the pure rootless joy of being nowhere, of being on the darker side of the world. Armstrong tapped into why punks are punks, why we go to the basement for shows and not the Filmore, why we hang out with other freaks and drink cheap beer, why I choose not to be part of upper society: we like it. We like being in the underground, part of a world where we are accepted in ugliness. “I found my place in nowhere.”
More than the other Green Day albums, Insomniac has a complete self-loathing, similar to early Who singles like “Substitute” and “Happy Jack”. “No Pride” still sounds like a kid who just got beaten down, who screams insults at the kids who leave him behind on the dirty ground, but who has to blink back tears of rotten humiliation. Who can't identify when Billie raves that he's got a knack for Ducking everything up? That he's got no pride, nothing to speak of other than a gripping feeling that the days will get colder and he'll be all alone with nowhere to go but down? God knows I have when I screw up for the twentieth time in a row and I feel that pinch in my stomach and that hideous voice in my head screams again, YOU FUCKED IT UP YOU FUCKED IT UP AGAIN, YOU Ducking MORON, YOU COULDNT EVEN GET THE BALLS TO TALK TO THAT Ducking BEAUTIFUL GIRL and that tension builds up and you play a song like “Panic Song” and your eyes harden and feel heavier cause God knows you've been through some BARNICLE and you just want to listen to a song that sounds exactly like how you feel all the time.
And sure, Tight Wad Hill is a song about drug dealers in Rodeo, California, but it's also a song about total losers having the time of their lives hating themselves and their lives, a song that cuts straight to the heart of what Cometbus said about suburban punks: “They didn't have a future, but they didn't even have a present or a past.”
Insomniac is an album for them. It's an album for dead end walks at night; for taking massive bong hits and jumping up and down in your room to; for the triumph of a great show; for the bitter realization that your life kinda sorta sucks; for figuring everything out; for driving with your best friend around the small town streets; in short it's an album for deadbeats and freaks, for losers, for punks. And yeah Green Day sold out, the musical sucks, blah, blah, blah, and yeah you're right, the musical does suck balls. But Green Day were certainly never poseurs, and in 2011, this is not just a punk album, but an album for the punks. Blast “Jaded” in a used car filled with booze and aimed for nothing in particular. 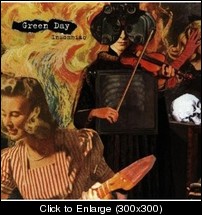