How do you guys like working with Beartrap PR?
ItÃ¢Â€Â™s been great! Chuck is awesome.

Do you have any upcoming shows?
In October we're doing a short US tour for about 10 days, and then we leave for Europe on Halloween. WeÃ¢Â€Â™ll be over there for 6 weeks this time, hitting a whole bunch of countries.

What give you the most inspiration for your lyrics?
Inspiration can come from anyone or anything--any word or feeling or experience can influence something that you write down that later ends up in a song. If anything inspires me the most, itÃ¢Â€Â™s the goal of trying to connect to people with our lyrics.

What is the title of your latest album?
Ã¢Â€ÂœA Cheap Print of a MasterpieceÃ¢Â€Â

How many songs are one it and how long did it take for you guys to finish the recording?
There are 9 complete songsÃ¢Â€Â¦well 10 if you count the hidden track, but itÃ¢Â€Â™s a cover that we didnÃ¢Â€Â™t actually get Ã¢Â€Â˜permissionÃ¢Â€Â™ to do, so you actually have to buy the record to check that out. There are also 3 interludes that help to tie some of the other tracks together. We spent around 20 days in the studio for recording and mixing, spread out over a couple months.

Could you tell us a little about it? (where and who recorded it? where we can get a copy?)
We worked w/ Nick Rotundo at Clay Creek Studios in Newark Delaware. Nick has worked with some pretty cool bands like Boy Sets Fire, Paint it Black, and None More Black. He does an amazing job, and because he keeps things affordable for independent bands, we were able to spend a good chunk of time in the studio getting things as perfect as we could.

What is the best thing about playing music?
I think different members of the band might say different things, but I really love being able to connect with people through touring and playing live. The idea for me has always been to get our music and what we have to say into peopleÃ¢Â€Â™s heads and hearts, and to see our energy transfer into someone in the audience, even if its just one kid, is unbelievable.

Creating is also really fulfillingÃ¢Â€Â¦just being in a room and seeing a song come together with everybodyÃ¢Â€Â™s input. It can be exhausting, but itÃ¢Â€Â™s also so gratifying.

Any funny stories about a fan that stand out the most?
When we played in Holland on RyanÃ¢Â€Â™s birthday this year, it was a pretty small bar show. But there were these 3 girlsÃ¢Â€Â”all like 16 or 17Ã¢Â€Â”and they all had us sign their bellies with a Sharpie after we played. Somewhere there is a really hilarious picture of all three girls with their heads cut offÃ¢Â€Â”just them covered in signatures. Well, over the course of the night they all got very intoxicated, along with the mother of one of the girls and the older brother of another, and bought us lots of drinks. Then this guy from LA who lived in Holland bought us a whole bunch of whiskey shots for RyanÃ¢Â€Â™s birthday. We went to another bar for a while, then came back around 2:30am and the place was completely packed. So they made us play an encore. IÃ¢Â€Â™m sure it sounded terrible, but it was so much funÃ¢Â€Â¦Europe is crazy!

Do you guy have any tours in the making?
Oh yeah

Where are you going to be playing?
Oct 19-27 weÃ¢Â€Â™re doing a really short US run, just through our area and some surrounding states. Then on Halloween we had back to Europe for 6 weeks, and that should be amazing. WeÃ¢Â€Â™re going to be all overÃ¢Â€Â”doing the UK w/ or friends For Old Times Sake, then the mainland mostly w/ Astpai hitting Holland, France, Spain, Germany, Austria, Croatia, Slovenia and hopefully Italy. Our record came out on Rise or Rust Records in Austria back in May and they have been great so far. Plus, playing over there has been so much fun.

What do you think about UFOs?
I hope one lands on the White House lawn in the very near future. Then a little alien climbs out and high-fives GW like theyÃ¢Â€Â™re old friendsÃ¢Â€Â¦it would explain so much!

What religion are you guys and does it effect your music?
Again, I think everybody would have a different answer for that one. For me, IÃ¢Â€Â™m sure my questions about faith, organized religion, and even the existence of god have some effect on my writing. Ã¢Â€Â˜Confessional,Ã¢Â€Â™ the last track on the new record, is partly about finding faith and hope in unexpected placesÃ¢Â€Â¦so you can certainly make a connection there.

What do you think of vegetarians?
I definitely admire people who can maintain the diet, and I think in a lot of ways itÃ¢Â€Â™s a much healthier way to eatÃ¢Â€Â”for your body and for the planet. Either way most people should be eating a lot more fruits and vegetables, even if they do eat meat. None of us in the band are vegetarians now, but our bass player Jeremy was for a number of years.

What do you guys do for work right now, other than playing music?
Jeremy runs a very busy screen-printing shop in Philadelphia. Carlin works in JeremyÃ¢Â€Â™s shop. Ryan does freelance sound & video work. Brian works as a temp for a giant investment company called Vanguard, siphoning money out of STICK ChaneyÃ¢Â€Â™s investment accounts to fund our bandÃ¢Â€Â¦.and right now IÃ¢Â€Â™m a research editor for a company that does media clippings. I would explain that, but itÃ¢Â€Â™s not really very interestingÃ¢Â€Â”I also run a small booking agency called Ante Up Booking.

What were some of your favorite bands growing up and what bands have influenced your band the most?
I was one of the many, many kids who first picked up a guitar and starting writing music because of Kurt Cobain and Nirvana. I think for Brian it was Green Day. Eventually mainstream alternative rock led me to punk rockÃ¢Â€Â”bands like Minor Threat, Bad Religion, Pennywise, NOFX, etc.Ã¢Â€Â”and that led me to local bands and hall shows. It was that environment that really inspired me the most though.

Over the years weÃ¢Â€Â™ve all been inspired by so much music, and it all comes out in our songs. For instance, we would probably say our music takes a lot from hardcore and punk bands like Kid Dynamite, Strung Out, Refused, Propaghandi or our friends A Wilhelm Scream. But I could also go through our songs and point out tons of little parts and say Ã¢Â€Âœthe idea for this part kind of grew out of a Radiohead songÃ¢Â€Â or Ã¢Â€Âœthis riff totally rips off Slash or Mike CampbellÃ¢Â€Â™s (guitarist in Tom Petty & the Heartbreakers) style. CarlinÃ¢Â€Â™s favorite bands are the Vandals and The Suicide Machines, and Ryan is totally a blues/rock guitar player playing punk/hardcoreÃ¢Â€Â¦it all comes together somehow.

Do any of the members of the band play in any other bands?
Not seriouslyÃ¢Â€Â¦but Brian is working on some awesome solo material IÃ¢Â€Â™ve heard a little bit of, and once every 3 months Carlin is filling-in for somebody or starting some amazingly ridiculous side-project w/ one of our friends.

Anything you would like to say to your fans reading this interview?
We love you! Thanks for supporting us and always being there when we needed something to remind us why we do this.

Do you have any promoting secrets that you would like to share with our readers?
ThatÃ¢Â€Â™s why you call them Ã¢Â€Â˜secretsÃ¢Â€Â™Ã¢Â€Â¦.muahahah! But seriously, just try to write music that love and make it the best it can be. Then get out there and connect with people and play as much as you can. But try to make smart decisionsÃ¢Â€Â¦there are a lot of options and opportunities out there for independent bands today. You donÃ¢Â€Â™t just have to go on tour for 3 months and lose thousands of dollars and make yourselves crazy just because those are Ã¢Â€Â˜the rules.Ã¢Â€Â™ Make your own rules!

What do you think of Big Smile Magazine?
We think you guys are awesome for asking us to do this interview! 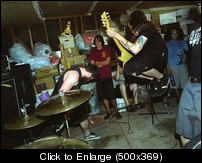