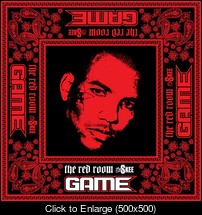 The first track off The Red Room is "400 Bars (Skeemix)" (Bars- The point in a verse that contains the punchline) produced by Los Angeles DJ, DJ Skee. Seriously 400 bars!!! Game blessed his fans with 20 minutes and 28 seconds of intense lyrical heat. Originally done over Jay Electronica's "Exhibit C," but for The Red Room Game brought back his former DJ to put his twist on it and Skee created another classic. The Red Room is full of collaborations and a slew of various artists like Nipsey Hussle "Ha Ha," Fabolous "Never Stop Hustlin'," Hurricane Chris and Bizzy Bone "Real Gangstas," Jadakiss and Jim Jones "Gangs of New York," Lil Wayne and Birdman "Everything Red," Busta Rhymes "Lowrider," Pharrel "It Must Be Me," Diddy "Heartbreak Hotel," and Travis Barker lays the drums down for "Shake." True to the game, Game shares the spotlight with his fellow Black Wall Street artists like Menace, XO, Juice, Maad Max, Kanary Diamonds, and Mysonne.

On The Red Room we got a tag team type song in "Ha Ha" that I've never heard Game do before, entertainment songs like "The Professionals," and "Shake," then we also got some straight up hip-hop with "400 Bars," "Never Stop Hustlin'," "Diamonds," and of course we have Game's infamous N.W.A. influenced "Revolver or the Semi," "Real Gangstas," and "Dopeman." I can honestly say I can't listen to this mixtape all the way through, but it does carry some heat that can't be topped. When Game is on Game is on and his dedication in the booth is off the charts. I’m anxious to hear what Game has in stores for us on The R.E.D. Album coming out on July 6, 2010.