Unbelievable! That is all I really need to say. Davey from Tipper’s Gore had told me that the Clinic was an awesome place, so I had to go there to see for myself when Tipper’s Gore played. He was right. It was awesome. The Clinic is basically a rented out warehouse in an industrial park in Santa Ana, the perfect place to see punk/hardcore bands. I actually paid my $5.00 to get into the show. I haven’t had to do that in awhile, but I am down to help the cause. The first band I shot was Friendly Neighbors. They were a lot of fun and played early punk rock. The next band was Audacity. I am not exactly sure how I would categorize them. Fugazi popped into my head, but they weren’t a blatant rip off of Fugazi. In any case, they were awesome. I would have bought their CD if they had one. The last band was Tipper’s Gore. If you guys still have not seen these guys play, you are truly missing out. If you want a glimpse at what the hardcore scene might have looked like back in its heyday, go to a Tipper’s Gore show. I shot some band shots of Tipper’s Gore after the show using an old, medium format TLR camera. I posted them in my blog section on myspace. Check them out. 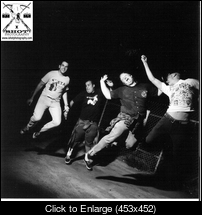