Straight out of Massachusetts comes a band that contains catchy pop punk melodies, chugging hardcore breakdowns and synthesizer overlays that defines it owns genre. The first time I listened to this album I was hooked. It instantly became one of my favorite albums of the year. Every song on the album is worth being there and every song hits just as hard as the last, if not more. The intro of the cd starts off with a chant that follows perfectly into the next song "Prepare To Be Digitally Manipulated", which is one of my favorite tracks off the record. With a fun synthesized intro, catchy melody, sick breakdown and hardcore chants you will not be disappointed. My favorite song off the record by far is track four, "Heroes Get Remembered, Legends Never Die". With a double starting out the song, screeching guitars, catchy riffs and lyrics that are bound to make you sing as loud as you can, what else could you want? The rest of the album is nothing short of amazing. Every track has something to love about it; whether it is the breakdowns, lyrics or insanely captivating melodies. Four Year Strong combine equal parts of melody and mayhem to create a sound that is sure to blow your mind. It's like nothing you have heard. It taps a new genre. It is its own. So get ready for a band that is bound to make you shake your booty and start a riot. (Release: September 18, 2007)

Tracklist:
1. The Takeover
2. Prepare To Be Digitally Manipulated
3. Abandon Ship Or Abandon All Hope
4. Heroes Get Remembered, Legends Never Die
5. Wrecked 'Em, Damn Near Killed 'Em
6. Catastrophe
7. Men Are From Mars, Women Are From Hell
8. Bada Bing! Wit' A Pipe!
9. Beatdown In The Key Of Happy
10. If He's Here, Who's Running Hell?
11. MANIAC (R.O.D)

For fans of: New Found Glory, Lifetime, Set Your Goals, Saves The Day 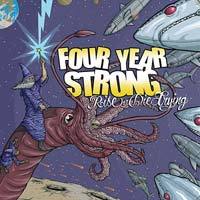