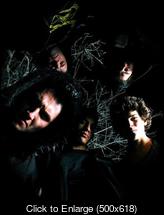 Genre: Alternative; Hardcore;
It was a great night for members of Forever Wings Fold, not only because a good amount of fans came out to see them despite that this show landed on the same day as Van's Warped Tour, but also because they were opening up for genuine rockers, The Human Abstract. Forever Wings Fold took the stage with confidence of their set and line up which included several songs off their new album "BRAVURA" which is set to come out on July 9th/10th. These new songs that they've played were amazing and so different from what I'm use to hearing from these talented musicians. "BRAVURA" will definitely be the album to push their career much further. Compared to the last few times I've seen these guys play, during their set they seemed more put together and not all over the place like most unsigned bands, even some signed bands. Overall, Forever Wings Fold had an outstanding set which got the crowd moving and even a pretty brutal pit (kids these days are getting a lot more physical than what it use to be...eek!).

Be sure to check out FOREVER WINGS FOLD's new cd "BRAVURA" set to come out July 9th/10th. I believe the guys said it'll be up on their site so you have no reason NOT to check it out: