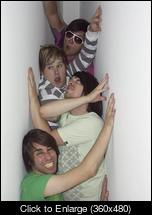 Genre: Pop;
"This isn't goodnight, this is goodbye" is the lyric that has been burnt into my memory from the show at Chain Reaction on Saturday night with a little band called Eudora. The last time I had seen these guys was before their CD, The Silent Years, had come out and just so happened to be with Halifax at this same Anaheim venue. It wasn't the best set that night but this night made up for everything that went wrong at that past show. Before the guys took stage to start the show, the fans were going insane for Kevin, Robby and Tim that were just setting up for sound check. As the lights dimmed down, and the fog took the stage, Eudora came out with their energy exploding to give their fans the best show they've ever went to. Kevin, Robby and Tim were all over the stage making sure that they were bonding with every fan that came out. Lead vocalist, Brandon, would be down on his knee's singing to long time Eudora fans and even crowd surfing over fans while singing along to songs of their CD The Silent Years. That night, Eudora definitely were the rockstars of the night and gave an astonishing performance.

If you missed out on this great set, here's a clip from Punk Video's Rock of Eudora's song "This Is Goodbye".