Erik Newton of the New Hotness 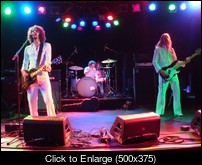 Featured Artists: The New Hotness; Genre: Rock;
The New Hotness is an upcoming, three-piece rock and roll band from Arcadia, CA. I met up with Erik Newton, the band’s vocalist and guitarist, at his family owned and operated trading card shop. We got ourselves some lunch across the street at Zelo’s pizza and discussed the current status of the Hotness.

The New Hotness is in the middle of recording their second record: expected to consist of 25 heavy-hitting songs. The record is being recorded at Poolhouse Studios by engineers Mike Stromsoe and Elliot Chenault, long time friends of the trio. Erik claims, “We have an enormous amount of confidence in Poolhouse Studios’ ability to shape our sound to rock and roll perfection.”

The New Hotness’ upcoming album has been in production for over a year and currently has no defined release date. In response to questions concerning the records production length, Erik asserts, “The New Hotness is creating history with this album; that’s why we’re taking so long. We feel that we are shaping the face of rock and roll. Even if this album takes three years to complete, we are going to get it done and get it done right.”

Eager fans can expect the release a 5 song sample EP teaser this summer. Erik jokes that the actual album release date will be Dec. 21, 2012, pondering the question: “Will the release of the New Hotness’ record save the world from its demise?”

The New Hotness’ previous, self-titled, record is largely considered a success by the group: “We’re stolked about what came out. We’ve played a lot of cool gigs, met a lot of cool bands, and had a lot of cool help by our friends and fans.”

The album has brought about immense film and TV exposure for the band including soundtrack placement on the CW and inside AMC theaters, placement on a nationwide Canadian Budweiser commercial, and a solid gig at CBS’ Alt Games in San Diego. The New Hotness was also able to rock their way to a top spot in the Emergenza music festival/competition in 2007. Erik feels, “We’ve done pretty well for 3 guys from Arcadia independently producing our own music.”

Over 1200 copies of the album have been distributed world-wide. TNH expects to double their exposure and good fortune with the release of their second album.