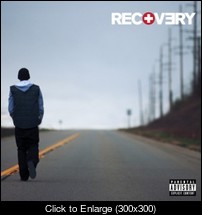 Featured Artists: Eminem; Genre: Rap;
Finally! The album I’ve been waiting for since last year. Originally “Relapse” now renamed “Recovery” leaked two full weeks before its release on June 22, 2010. Once I heard the album leaked my main mission that day was to obtain a copy for myself and it’s been playing in my car or at home since then.

“Recovery” is the seventh studio album released on Aftermath/ Interscope/ Shady Records. Eminem is back!!! From the first song to the end it’s like a lyrical war between Eminem and Marshall Bruce Mathers III and the end result is the slaughter of any album I’ve heard all year. No gimmicks, no pop singles, no soulless club bangers, just great rap/hip hop on “Recovery.” Just like Eminem’s other albums there are not many features on “Recovery.” “Talkin’ 2 Myself” features Kobe, “Won’t Back Down” features Pink, “No Love” features Lil Wayne, and “Love the Way You Lie” features Rhiana. “Recovery” is brutally honest. When listening to songs like “Talkin’ 2 Myself,” “Going through Changes,” “Spacebound,” “25 to Life,” “Love the Way You Lie,” and “You’re Never Over” it’s almost like he’s talking to you rather than just rapping. It’s that sense of mortality that makes this album so great. This album compels me to listen to every song under a microscope because I don’t want to miss a rhyme, metaphor, or punch line. If you haven’t downloaded “Recovery” by now or you’re just waiting for June 22, 2010 to come around, you will not be disappointed.