Emily & Simon Step In From the Shadows

Birmingham duo ‘Emily & Simon’ are just starting to make an impact on the Midlands music scene, even if they’re not quite yet aware of it. Looking back at the last year there’s plenty to add to the biography – landing a deal with a record label, featuring on radio stations as well as working with venues and promoters all over the region just about cover the basics.

Their current EP, ‘Shadow’ had originally been released through Red Monster Records (now Medellin Music) on iTunes and has drawn in critical acclaim from press, radio and the public. Jeremy Szygowska of KIC Radio described their live performance on his show as something that “literally stopped me in my tracks, genuine emotion in the lyrics and the acoustic [guitar] sent shivers up my spine.”

2010 has been an impressive year for the pair; ‘Shadow’ has now received radio play at commercial level with BBC Introducing, BBWM, Birmingham City Radio, 2nd City Radio and the Bridge FM. Not only on the radio front have they been pushing back the boundaries, but the live scene too; supporting the ever popular ‘Trevor Burton Band’ on several occasions. For those of you who are asking ‘Who’s Trevor Burton?’ then he had a string of hits with his band ‘The Move’ in the 1960’s.

While writing together for the past ten years “on and off” the pair are now looking to the future and a second EP to follow up the three track debut. “I was 11 when I meet Simon, he used to teach my dad guitar and went on to teach me Piano but it didn’t really click with me. I found singing and writing more appealing, as did Simon and it grew from there to what we are doing now.”

Being given a slot to play at Wolverhampton Art Gallery next year is yet another example of how the duo are gaining recognition in the wider public. It’s performances in venues like that which can really catapult people into the public eye – I’m hoping the pair keep going the way they’re going as they’ve really got the talent.

If this year is anything to go by then 2011, and that follow up EP, is going to be more than well worth a listen. If anyone’s looking for a tip for best new act for 2011, here it is.

To find out more about one of Birmingham’s finest acts then check out their Facebook page at: www.facebook.com/EmilyandSimon 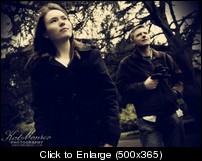