When did you guys start?
John (guitar, vocals) and Alex (drums) started as kids in 1995 playing Nirvana covers and writing originals that sounded like Nirvana covers. Jonathan (bass) joined the band in 2003 and contributed a more squishy vibe to the music. Natalie joined in the Summer of 2006 and added a spacey, dream-like quality that completed the circle.
Where are you guys from?
John, Jonathan, and Alex grew up in various towns in Rhode Island and Natalie grew up in Des Moines, Iowa. The four of us met while going to school in Boston.
How did you meet each other?
John and Alex grew up together in the same small town of East Greenwich, RI and played music. Jonathan, also from RI in nearby Cranston, we met through a mutual friend in Boston early on in college. John had met Natalie while discussing Zeppelin covers at a party and she soon joined after falling in love with our first record.
What kind of music most influences the band?
Anything that crosses genre-boundaries and comes from the soul. Progressive rock, psychedelic, funk, electronic, reggae, experimental, industrial, jazz, classical, post-punk, the list goes on and on.
What music could you not breathe without?
Prince, Soundgarden, King Crimson, Genesis, David Bowie, James Brown, Yes, Cat Stevens, DJ Shadow, John Zorn, Beck, Phish, Zeppelin, Floyd, Zappa, Parliament, Grateful Dead, Can, Bad Brains, Bob Marley, Brian Eno, Talking Heads, Wilco, Devo, Harry Nilsson, Herbie HanSTICK, Jimi Hendrix, Love, Mikes Davis, The Beatles, Morphine, Nine Inch Nails, Pearl Jam, Radiohead, Stevie Wonder, Tom Waits, Tool, Ween, Michael Jackson
What's the most embarrassing song you like right now?
Ã¢Â€ÂœI Wanna Dance With Somebody (Who Loves Me)Ã¢Â€Â by Whitney Houston
What makes you different than other bands?
We push boundaries while writing accessible songs. Each song is its own journey and has its own special formula, yet all our songs seem to have a unified cohesiveness to them. agenda, other than to constantly explore new territory and push ourselves beyond our limitations. We have a tremendous respect for all music and we strive for authenticity of the styles we play while putting our own stamp on them.
What category would you place your music?
Exploratory rock with elements of funk and world music.
What other bands were you guys in before this one?
Jonathan used to be in a Providence based band called Ted Only Knows before joining Ellis Ashbrook. We have all performed in various side projects over the years as well.
If you could meet yourself as a 10 year old, what would you say to him (or her)?
Get ready to rock!
Anything you would like to say to anyone reading this interview?
Please check out our new album Ã¢Â€ÂœMeridiaÃ¢Â€Â on iTunes! Please visit ellisashbrook.com! Please come to a show! And if you do nothing else, please keep an open mind and donÃ¢Â€Â™t fall into the soul-crushing routines that keep you from REALLY living!! Smile at strangers, but donÃ¢Â€Â™t be a creep about it. Help people in need. DonÃ¢Â€Â™t be selfish all the time, but donÃ¢Â€Â™t always put others before yourself. You deserve the best that life has to offer. Now go get it! www.ellisashbrook.com 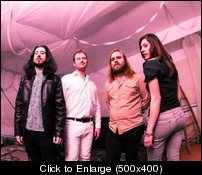