The show began for Electric Six around 10PM on a Thursday night. They were amazing. The crowd cheered and dance and even the band members had fun doing what they do best. Songs like "Dance Commander," "Improper Dancing," "Evil Generation," and "Bite Me" were played. The crowd was full of lots of energy and the singer especially made the show fun. The singer was very energetic and acted in a playlike serious yet fun manner. He even did pushups and situps while the music was going. I can't even explain their music, but they are actually very popular in Britain and Russia apparently and more of the nortern states in the US and they say they have began to trickle down into California and the lower region. This band must be shared around and spread! The sound at the show was great and the music was intense. Even for a somewhat small venue at the Coach House in San Juan Capistrano. With their riffs and great catchy licks this band made the night awesome for all its listeners that came to dance. The show was very sucessful and I even got a chance to talk with the drummer, shake all of Electric Six's hands, and I took tons of pictures. 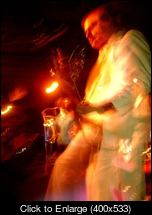 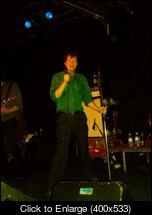