The debut full-length from Direct Effect, Sunburn, is now available for Pre-Order from Tiny Engines. All vinyl pre-orders will receive an instant album download. Additionally, digital copies are available for just $5 on Bandcamp. The LP will follow up the band's 2011 debut 7", Forget The Rest.

The band is premiering their video for the track "[ ]" on Noisey/Vice today. You can stream another new song, "Yo No Quiero", on Brooklyn Vegan as well.

As much as one might enjoy and appreciate the brute force and precision of noise rock it's also a genre that is too often owned and operated by jaded old dudes who turn up their noses at an audience. Luckily for us Direct Effect leave the holier than thou pretentious vibes at the door and invite the audience to do the same. The band is loud and heavy of course but they play with the intensity and reckless abandon of kids whose roots belong firmly within punk rock and hardcore. On their debut full-length, the band has measured out close to a half hour of unadulterated, noisy hardcore punk that will make fans of Paint It Black, Pissed Jeans and Metz stand up and take note. What was only hinted at on the band's debut 7" is now fully formed on Sunburn. 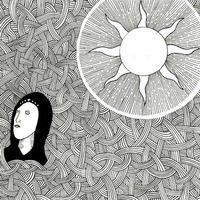