Genre: Blues; Punk;
Devil’s Brigade is a solo project from Rancid’s Matt Freeman, although Tim Armstrong was heavily involved as both producer and co-songwriter, as well as playing guitar, and also singing on a couple of the tracks. Lars Frederiksen also appears on one track, so perhaps it would be more accurate to call this self-titled record a Rancid side-project than a full solo album. Whatever you call it, it’s not a Rancid album masquerading as something else. This record (available now from Hellcat Records) has a definite sound of its own that is quite distinct from Rancid’s sound. This is much more rockabilly – influenced punk than Rancid usually is, and less politically oriented. This time Matt plays a stand-up bass and it has a definite impact on the sound. The steady strum of the bass is almost always present, even in the faster songs and it gives the overall music an older, even bluesy feel.

This is not to say that Matt is turning completely away from Punk for this record. The first track “I’m Movin’ Through” is recognizably a fast Punk song in any language. Then track 3, “Shakedown” is all about “25 years of punk rocknroll" quite literally, as he sings about the many different places he’s played around the country and the world. And track 11, “Protest Song” is exactly what it says it is.

However the more rockabilly tone of the record makes itself more obvious in some of the other songs. Some of them look towards more historical subjects, like track 4, “Bridge of Gold,” which is about moving out west to build the Golden Gate Bridge during the Great Depression, and also the last track, “Half Way to Hell” which is also about people working during the Great Depression – a subject that is very timely today, unfortunately.

I have a few friends who say that they’re not crazy about Matt Freeman’s vocals when he sings with Rancid, and it’s true that Tim Armstrong has the best voice for that group, but Matt’s voice is actually pretty well suited for this record and works well with the material. Whether you are a Rancid fan or not, this is a pretty good side project both for Matt and his mates. 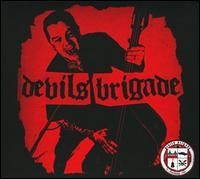