me - what is the name of the band and where are you guys from?

Liz - The bands called Deadline, my names Liz, Im the singer and we are from London England.

me - what kind of music do you play?

Liz - we consider it to be punk rock, but you can call it whatever you like.

me - I think it sounded a bit tsunami bombish ...

Liz - its prolly just the female vocals, a lot of people compare me to a lot of singers

me - what have you been compared to

me - Uhh, I think Poly styrene was a bit more screechy ...

Liz - yeah that's what i think

me - Who are your musical influences?

me - Any thoughts on wasted being cancelled?

Liz - umm .. well its a bummer, Id better not say too much if there is anything reading this haha, its right, Im just really disappointed.

me -Do you think they are going to try to have another wasted here again?

Liz - I don't know if darren and jimmy are going to bother with America again, i don't know if they will be able to really, there are a lot of pissed off people.

me - Yeah there are a lot of pissed off people, I think it sucks for both sides.

me - Was this your first time out here?

Liz - well this is our first time on the west coast, we did the east coast, umm 18 months ago.

Liz - well it was actually quite quiet.

me - Who did you tour with?

Liz - Brassknuckle boys. and they were lovely people, great band as well.

me - So you said it was quiet?

Liz - well yes, it was our first time out in America so kids didn't know us, but we have stuff out over here now. Kids were singing along tonight.

me - Did you want to come back out again?

Liz - We are hoping to do a bigger tour, now that we have stuff out with our record label out here, I think maybe we are going to do a couple months on the west coast.

me - Who are the other people in the band and what do they do?

Liz - We've got Herve on the bass and he's the main guy, he does all the organizing, we've got lee on rhythm guitar, ryan is the new guy, he's on main guitar, leads and all that stuff, and normally we have Nicco on drums,but because he's greek, we didn't know he needed a visa to come here, so he's not with us this tour, and we didn't find this out till we found it out at the airport. So he couldn't get on the plane.

me - So how long have you known the current drummer that's with the band tonight?

Liz - we toured Deep Eynde with in europe in april and we got friends with everyone and he said any problems need any help, give us a call when you are in America, thursday morning we rang him up and said can you play tomorrow! HAHA!

me - Has he ever played with you guys before?

Liz - oh he's very very good, he picked up all the songs, he played last night, we turned up to the venue half an hour before we played, sat in the car went through the song list.

random guy - i saw your set, and that was pretty cool, you don't have any spare change or anything do you?

Liz - so yeah we had a half hour before we went on stage and played.

me - Do you have any albums out right now.

Liz - we do, we just released our third album, its called getting serious. In america its on SOS
records, and we have two other albums, back for more is album ..2, and more to it is ..1, but I prefer the last one.

me - Any thank you's to anyone?

Liz - Just everyone who helped us out on this tour. especially pete who drummed for us on thursday in san Francesco, and jaun for playing with us, and hopefully we are going to get chip playing with us thursday and friday, thank you! 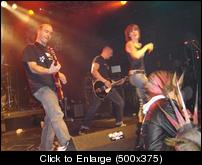