When David Lake packed his bags and left the glitz and glamour that comes with a childhood spent growing up in Hollywood it's probably safe to say that he wouldn't have assumed he'd be embarking on his new project. The 21 year old multi-instrumentalist has stepped away from the stage and into the studio working on re-mixes which aim to showcase his production talent. His first promotional demo is a wonderfully slick mash up of Ellie Goulding's 'Starry Eyed' and Katie Perry's 'ET' - combining two of my favorite songs into one track meant the guy was on a winner from the start...

Now living in London, David Lake is looking to build a name for himself. Odd considering he left Hollywood behind for the UK. "Music is an art form and it's supposed to be expressive" he told me. "I can't tell you how frustrated I get when I hear pointless lyrics written purely to be commercial. What I'm trying to do with my new work is display emotions which tell stories and explain what I'm feeling."

I don't normally go in for re-mixes, I like something crafted and created from scratch by a person with an instrument in front of them. Most people who know me know that i'll take any opportunity to slam 'computer music' but David Lake's work is intriguing, fresh and innocently simple yet brilliant.

Don't let the fact he's specializing in re-mix work fool you into believing he can't play proper music though... during the interview he whipped out a guitar and played along with the track as we listened. My main praise for the new demo sits around the fact David Lake hasn't just slapped on a beat, tweaked the vocals and sped the track up, he's crafted and chopped up the songs and put them together. It isn't made by a computer, it has been handmade.

"It's not my own work that I mix but it's about finding something out there that speaks to me and just tweaking it to suit what I'm feeling at the time of putting a piece together. We all do it, we have songs and bits of music that remind us of situations and events and I'm no different. I just bring together different lyrics and beats and create that track which perfectly sums everything up."

If you'd like to find out more about David Lake then you can check out his Facebook page at: www.facebook.com/DavidLakeOfficial or check out his new remix at:www.soundcloud.com/davidlakeofficial 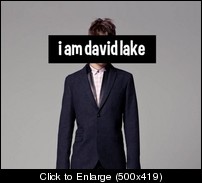