Career suicide this is not. It takes some pretty big stones to reference your own songwriting just four tracks into your first full-length album but Davey Suicide is all about the grand gestures. Grimy guitars mixed with insistent industrial beats and loops seethe beneath a charismatic namesake and it makes for an entertaining, yet familiar, set of songs. There are obvious musical nods to Marilyn Manson, ‘Grab A Gun and Not Your Morals’ and ‘Sick Suicide’ (complete with naughty cheerleaders on the breakdown) and Rob Zombie, ‘God Head Killers’. There are more subtle influences lurking here too. Elements of Dope, Wednesday 13, and the early compositional skills of Nikki Sixx weave their way in and out of Davey Suicide.

So, it’s all some second rate knock off? Not at all! There are more winners than losers among the 14 tracks offered up here. The above mentioned songs are very good as well as ‘Unholywood Kalifornia’, ‘Kids of America 3’, and ‘Uncross Your Legs’. The only missteps that I sense here is when Davey Suicide tries for the ballad. The quartet comes off sounding like Skid Row Light on ‘In My Chest is a Grave’ and ‘One More Night’. No matter. Pounding rhythms and scream along choruses is what this band is all about.

Davey Suicide declares, “It takes a tragedy to leave a legacy”. The only real tragedy here is that the high water mark for this style of music was left on the wall a dozen years ago. But all is not lost. There is plenty of solid material here and everything that was old is new again. 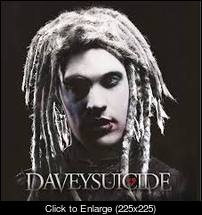